The country's biggest listed company, Fletcher Building, has raised its earnings guidance for the current year on the back of a strong local construction sector. 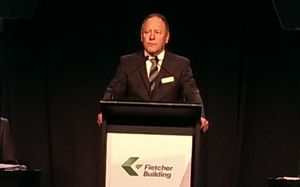 The annual meeting today was told the group expected an operating profit, before one-off items, of between $650 million and $690 million; actual earnings last year were $653 million.

Fletcher chairman Sir Ralph Norris said the outlook is mixed with New Zealand performing strongly, especially in construction, but Australia, the United States, Europe and Asia are patchy, with few prospects of a lift in activity in those markets.

He said the group outlook was positive after making adjustments for businesses sold since last year, such as Pacific Steel and Australia's Rocla Quarries.

"Operating earnings in the range of $650 to $690 million will represent solid growth year on year from our continuing business operations."

Fletcher Building's share price initially rose nearly 2 percent on the forecast but later turned negative and at 12.30pm was down 0.5 percent to $7.34.