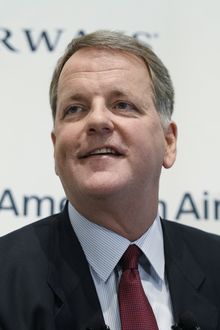 The airline, one of the world's largest, will start daily return Los Angeles to Auckland flights using Boeing-787 Dreamliner aircraft from the middle of next year, and will team up with Qantas and Jetstar to connect to the New Zealand and Australian domestic markets.

Air New Zealand has had a monopoly on the route since American Airlines pulled out in 2012.

But circumstances had changed to justify coming back into the market, American Airlines chief executive Doug Parker said.

The trans-Pacific route is set to get busier with United Airlines, a commercial ally of Air New Zealand's in the Star Alliance, also starting flights from San Francisco from the middle of next year.

Air New Zealand shares have fallen to a one month low as investors anticipate a dog-fight between the two groups forcing lower prices and earnings. Air New Zealand has already responded by slashing fares to Los Angeles.

An aviation analyst expects American Airlines' entry will boost traffic on the route.

"You tend to get a lot more than incremental, organic growth, you do tend to get stimulation of the market," said Peter Harbison of the Centre for Asian Pacific Aviation.

The number of people travelling between the two countries has grown by more than 10 percent a year in the past two years.

Auckland International Airport has estimated the new services will be worth nearly $200 million a year in tourism and related income.