Fonterra has increased its forecast milk payout to cash-strapped farmers by 75 cents after it announced a larger than expected net profit this morning. 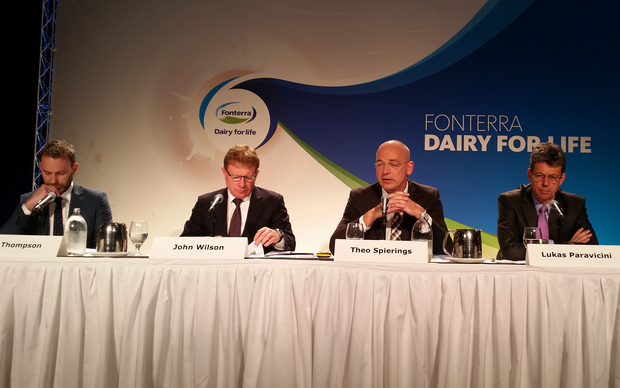 Shortly after revealing a $506 million net profit, Fonterra confirmed it had lifted its forecast payout to farmers for this season from $3.85 to $4.60 per kilo of milk solids, plus a 50c dividend.

The profit figure is 183 percent higher than last year but much lower than previous years' profits.

Mr Wilson said despite drought in some regions and floods, milk collection across New Zealand in the last season was two per cent higher than the previous season.

Chief executive Theo Spierings said the improved result was driven by a strong focus on cash and costs.

"We focused on improving our sales mix, achieving more efficiencies, maximising our gross margins and achieving our strategic goals faster. Our efforts contributed to a second half rebound in our performance and profitability."

"We have decided if we want to be a great company, rather than a good company....and we have overweight, then we lose that weight first," he said.

Plummeting dairy prices, weaker profits and cuts to Fonterra's worldwide workforce in a corporate shakeup have made for a tough 12 months for the dairy co-operative and its 10,500 farmer shareholders.

The co-operative said on Monday it was shedding 750 staff, saving it a total of $100 million a year.

"Overall farmers will be somewhat disappointed with the dividend, which fell below their expectations. Farmers expect the strategy to deliver returns that reflect their investment in the co-op."

ASB Bank chief economist Nick Tuffley said the payout might get as high as $5 a kilo, although some of the benefit of higher prices would be offset by a fall in production.

"We think there will be a $5 payout for this season but that is contingent on getting further price increases coming through over the season in US dollar terms," he said.

The outlook for the industry would remain challenging, with possible negatives such as the El Nino weather pattern on the horizon.

But Mr Tuffley said the lift in prices would flow through into incomes and that should make farmers slightly less reliant on their banks and debt to get through the season.