New Zealand's Glassjar is just one of a number of start-up companies attracting the attention of United States-based angel investors. 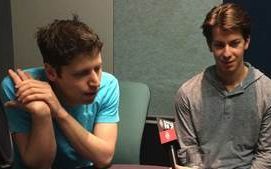 Silicon Valley entrepreneurs and investors Sam Altman and Scott Nolan were on the hunt for new companies to invest in and said they were surprised by the large number of good prospects in New Zealand.

They hosted two sold-out seminars in Auckland and Wellington over the past week, attracting hundreds of entrepreneurs looking for funding and some tips from the experts.

Their firms, Y Combinator and Founders Fund, had worked with many of the highest impact and most innovative start-ups to come out of Silicon Valley over the past decade, including SpaceX, Dropbox, Spotify and Facebook.

The duo look for start-up companies with particular attributes, such as determined, smart founders with a vision they were really passionate about, and backed by a great team.

Sam Altman said Glassjar's app that helped flatmates better manage flat finances was something that he would use himself.

Mr Altman offered start-ups a one-size fits all formula for funding of $US120,000, while Mr Nolan's business funds anything from $100,000 to $1 million or more.

The pair said they were surprised by the number of good quality start-up companies they had met with over the past week, particularly the number of start-ups that emerged from other innovative tech companies such as Xero.