The Government has been accused of sacrificing public services in its obsession on returning to surplus next year.

Finance Minister Bill English is adamant a surplus can be achieved. 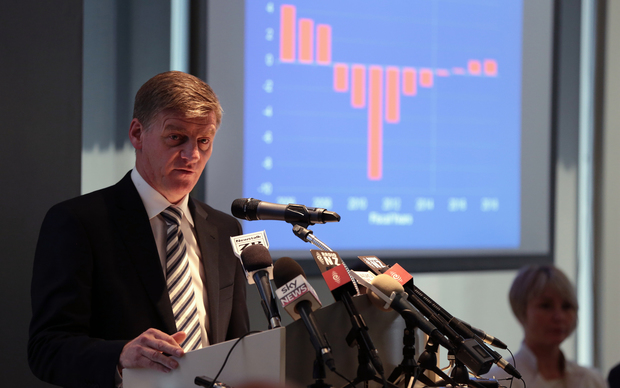 But in its half year economic and fiscal update yesterday, the Treasury cast doubt on that, forecasting a deficit of $572 million in the June 2015 financial year, due to falling dairy prices and low inflation.

It said growth would be good, averaging 2.8 percent over the next five years, underpinned by strong immigration and construction.

But it said it would not be good enough to help the Government reach its self-imposed target of a surplus next June, due to falling dairy incomes.

Prime Minister John Key was undaunted, and said a surplus is still on the cards.

He said New Zealand had come a long way from a deficit of $18.5 million, which was caused mainly by the Canterbury earthquakes. He thought a surplus would be a definite in 2016, but would probably be achievable next year.

Mr Key said this had been helped by New Zealanders tightening their belts and helping the Government achieve its goal of deficit reduction.

To help its goal, the Government will reduce by one third its planned new spending of $1.5 billion a year until 2017.

By then, the extra $500 million could be used for tax cuts or more spending.

None of this is good enough for the Council of Trade Unions, which said the Government's fixation with next year's surplus would come at the expense of much needed boosts to health and education spending.

But the Government insisted it would not take a slash and burn approach to return to surplus, and would protect the most vulnerable members of society.

Other critics charge the Government with continuing to ignore a ballooning pension bill.

Superannuation is expected to rise and account for more than half of total social assistance spending in 2019.

Economist at Infometrics, Benji Patterson, called this the elephant in the room, and said it should be dealt with before any tax cuts are made.

But the Prime Minister has for years insisted superannuation is affordable.