The US Federal Reserve has refused to say when it will begin raising interest rates again after it completes the wind-down of its money-printing programme in October.

However, the central bank said it would keep interest rates near zero for a considerable time and repeated its concerns about the weak labour market in the United States. 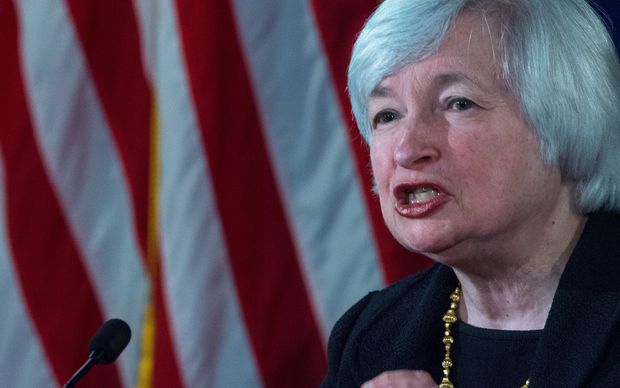 But the central bank raised its forecasts for rates next year, suggesting that when it does raise rates, it will do so faster than previously indicated.

US shares rose after the announcement, with the Dow Jones Index Industrial Average closing at a record high, up by 0.15 per cent to 17,156.85, while the US dollar hit a 14-month high.

"Starting next month, we will be purchasing $15 billion of securities per month, down $10 billion per month from our current rate. Let me reiterate, however, that the committee's expectations for the path of the Federal Funds Rate are contingent on the economic outlook.

"If the economy proves to be stronger than anticipated by the committee, resulting in a more rapid convergence of employment and inflation to the FOMC's (Federal Open Market Committee) objectives, then increases in the Federal Funds Rate are likely to occur sooner and to be more rapid than currently envisaged.

"Conversely, if economic performance disappoints, increases in the Federal Funds Rate are likely to take place later and to be more gradual."

The Fed has held benchmark overnight rates near zero since December 2008.

A global market strategist at JP Morgan Asset Management, David Stubbs, said the members of the committee have diverging views about how fast rates should rise.

"I think there is an enormous variation on the FOMC of what they believe is the optimal path for monetary policy going forward.

"If you look at the projections they gave us, each of the committee's members' views of interest rates over the next few years, there's an enormous spread out a couple of years from now. Views that interest rates should rise significantly and views they should rise very, very gradually."

The Fed's announcement sent the New Zealand dollar falling to a 7.5 low against a strengthening US dollar. The Kiwi hit an overnight low of 80.73 US cents, its lowest level since 4 February when it traded as low as 80.48 cents.