SkyCity's profits have fallen by 22.6 percent. The company has blamed the strength of the New Zealand dollar and cost of redeveloping its Adelaide casino. 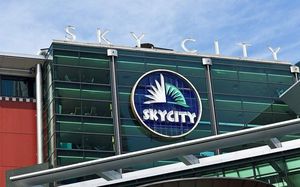 SkyCity chief executive Nigel Morrison said on Wednesday that its Hamilton business has not been performing well, but Auckland has been a stand-out.

The Auckland casino is attracting more gambling high-rollers from Asia, which has helped boost turnover.

Mr Morrison said in the first half, SkyCity's turnover was $2.6 billion and in the second half it was $3.9 billion.

SkyCity is on track to apply for resource consent for the Auckland international convention centre by the end of this year and demolition on the site could start by the middle of 2015, he said.

On Wednesday, the company announced plans to build a five-star hotel next to the convention centre.

Sky City estimates the convention centre and hotel development will create more than 900 jobs in addition to 1000 construction jobs, and says it expects to attract 33,000 new international visitors.