The stock exchange operator's net profit for the six months ended March of $7 million was achieved on a near 3 percent rise in revenue to $31.2 million.

A key factor in the profit increase was that the same six months of last year included a write-down in the value of the Australia-based Clear Grain Exchange. 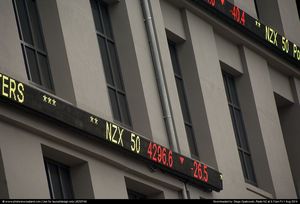 Revenue from capital raising, trading and clearing was up 6.8 percent, sales from listing and services such as data on listed securities, rose 11 percent and revenue from its agricultural information operations rose 5.4 percent.

Those three businesses accounted for more than 76 percent of revenue.

Revenue from market operations, which accounted for 17.3 percent of the total, fell 14.8 percent.

NZX has lifted its first-half dividend to 3 cents per share from the 2.5 cents it paid out in the first half of last year and it plans a full-year payout of 6 cents, up from 5.6 cents.