Most economists still expect the Reserve Bank to raise interest rates again later this month but it is no longer the absolute certainty it was. 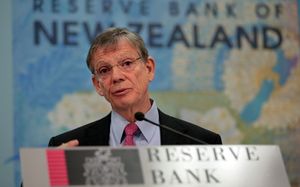 That's because of the double-whammy of a surprisingly sharp drop in wholesale dairy prices and weaker than expected inflation figures.

Some, including the Westpac chief economist Dominick Stephens, are wondering whether Reserve Bank governor Graeme Wheeler will go ahead on 24 July with another 25 basis point hike to 3.5 percent in the official cash rate, as signalled.

Fonterra's GlobalDairyTrade auction index fell nearly 9 percent at its latest fortnightly auction, and the average price has fallen more than 34 percent since the February peak.

As well, the Consumers Price Index rose 0.3 percent in the three months ended June, taking the annual increase to a lower-than-expected 1.6 percent.

Bank of New Zealand head of market economics Stephen Toplis, a self-confessed inflation hawk, said he believed Mr Wheeler would hike rates this month but that that may be the end of it for awhile.

"I wouldn't say we're terribly surprised but I think it's fair to say that it was on the less concerning side of the ledger when there was a possibility that it might have proven to be a little bit ugly on the other side of the ledger.

"The way to look at both the decline in dairy prices and the relatively benign inflation numbers is to recognise that it puts a question mark over continued rate increases by the central bank and, as a corollary to that, starts to question where the peak in interest rates might be.

"What it doesn't do, however, is put any question mark over whether the central bank should raise rates in July or not, because they most definitely should."

His reasons for that included a need for consistency; the Reserve Bank had said for some time it was going to raise interest rates by 100 basis points, or 1 percent, and then have a look at how the economy was reacting.

"They've done 75 basis points so from a consistency perspective, they need to follow through with the last one," he said.

Meanwhile, nobody was ruling out the possibility of further dairy price falls, particularly because buyers now knew they had the upper hand.

Economists were lowering their forecasts for Fonterra's payout to farmers and that could mean about $4 billion less going into farmers' pockets this season, compared with the previous season.