Dairy analysts attribute the drop in prices mainly to increased milk production in Europe, the United States and New Zealand.

Goldman Sach is even predicting a five-year global milk glut due to oversupply. 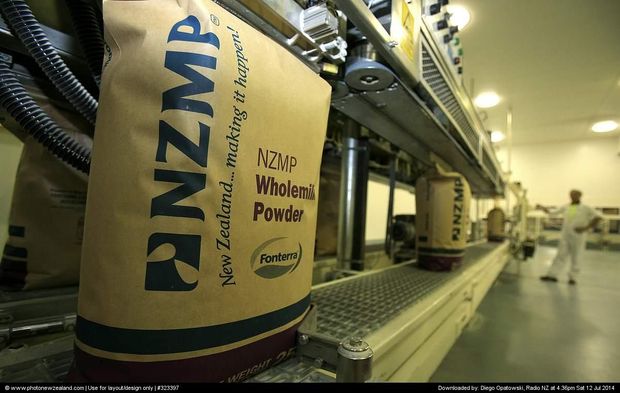 However, Mr Valeur said another reason was that Chinese consumers' appetite for expensive milk was waning.

He said it was supply driven and did not help when there was a slow down in China.

"The slow down in China is very much driven by the high price level of domestic milk in China which has slowed down consumption, so the value might still be increasing in China but it seems that the previous year's growth has levelled off a bit."

Mr Valeur said there needed to be readjustment of the market situation in China before there was likely to be any pick up in prices.

ANZ Bank rural economist Con Williams said at any rate it would take some time for China's retail dairy market to adjust to the drop in global milk prices.

He said previous research has indicated there was about a nine month lag between changes in the wholesale price of milk and changes in its retail price.

Mr Williams said sharp increases or decreases in the wholesale price of milk did not tend to be fully passed onto consumers who tended to be adverse to large movements in food prices either way, unless it was a seasonal product.

Mr Williams said prices of high-quality food such as what New Zealand exported to China may have plateaued there for the time being.

Danish dairy company Arla Foods says it's not worried about the current volatility in global dairy prices as, unlike Fonterra, it has a big home market as well as strong brands.

Arla currently sells 85 percent of its milk to Europe but sees that it must expand further afield as dairy production in Europe increases.

Arla has a 6 percent share in China's largest dairy producer, Mengniu, which gives the company access to sales and distribution channels in China for its brands.

Jais Valeur said Arla had historically been brand driven which meant it had more control over the price of its products.

He said in Scandinavia, Germany and the United Kingdom there could be an increase in milk production of around 5 percent next year.

But that may be balanced by lower production in southern Europe, so overall European milk production may grow by around 2 percent.