The Real Estate Institute of New Zealand (REINZ) is worried the double whammy of rising interest rates and the Reserve Bank's lending restrictions will slow the housing market too much.

REINZ figures released on Monday showed its members sold 6572 sold last month, down 14.8 percent compared with May last year. In seasonally adjusted terms, the number of houses sold in May rose just 1.6 percent from April. 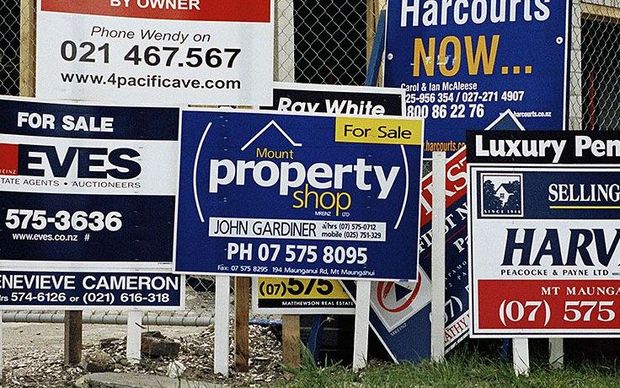 The institute's house price index fell 1.2 percent nationally in the month from April and was just 6.5 percent higher than a year earlier.

House prices in Auckland were down 3.1 percent compared with April but were and 9.4 percent higher than a year ago, while prices in Christchurch were down 2.3 percent in the month and up 9 percent on a year ago.

REINZ chief executive Helen O'Sullivan said that, as happened in April, all regions recorded a decline in sales in May compared with a year ago, and trend was for the market to soften.

The median house sale price nationally was $430,000 - lower than April but higher than a year ago.

From October last year, the central bank limited the amount banks can lend to people with less than a 20 percent deposit and it has raised interest rates three times this year, with further increases expected.

REINZ chief executive Helen O'Sullivan said she would like the Reserve Bank to review how the lending restrictions were working in practice.

"Our key concern is the LVR (loan-to-value) restrictions were touted as being a way of slowing down demand to enable supply to catch up," Ms O'Sullivan said.

"Supply, though, is not an immutable force and if the demand doesn't appear to be there, then supply may not appear to satisfy that demand if there's concerns about it being there.

"So it's a very delicate balancing act, I think."

Another concern for REINZ was that sales volumes were down considerably in the regions, and they were not places there had been significant price pressures.

"Auckland and Christchurch between them are 53 percent of the sales over the last 12 months but 76 percent of the price increase," Ms O'Sullivan said.

"I guess there is also deep concern in the regions that those markets are being slowed considerably and they weren't seeing the price pressure, so there's kind of a sense of a solution to a problem that they didn't have in some parts of the country."

Ms O'Sullivan wanted to see LVR restrictions eased, and consideration given to regionalising them.

"Note does have to be taken of the impact that increasing interest rates are now having," she said.

"That's definitely, I think, giving buyers pause for thought because it's not just the fact that rates have gone up but the very clear expectation that interest rates are expected to continue to rise over the next 12 months, so people are doing their maths on where they think it's going to be in 12 months, not just where it is right now."

The tap had potentially been turned off too quickly, and the institute was watching the market with considerable concern, she said.

It had always expected the greatest impact to be on volumes as opposed to price, and Ms O'Sullivan believed the price pressure was more noticeable at the upper end of the market - the $800,000-plus in the Auckland area.

"Our concern has always been on the volumes. We're feeling that the impact is more at that bottom end of the market which, realistically, that's the price point most places outside of Auckland and Christchurch are transacting."

However, the Bank of New Zealand is warning that the lending restrictions are resulting in the build-up of a serious amount of pent-up demand for housing which will be unleashed the moment the Reserve Bank announces an end to the policy.