Continued strong sales at KFC was the key contributor to an increase of 5.9 percent in total sales by Restaurant Brands during the first quarter of this year.

Sales in the 12 weeks ended 19 May were $77 million, with Starbucks Coffee up 5.5 percent and Pizza Hut up more than 9 percent. 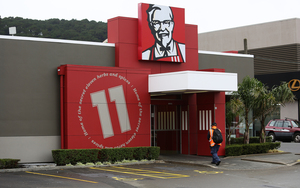 But the Carls Jr burger brand saw a significant fall in same-store sales.

KFC was the standout performer for Restaurant Brands with sales increasing by more than 5 percent to $57 million.

The company said the increase was driven by the launch of a new menu, in particular by family meals.

Total sales for Pizza Hut were in line with the same period last year, despite seven fewer stores, as the company continued its strategy of selling regional and lower-volume stores to independent franchisees.

Total quarterly sales at Starbucks Coffee were up just over 2 percent despite having two fewer stores than the prior year.

Total sales from the eight Carl's Jr. stores for the first quarter were up nearly 60 percent driven by new store openings, but same store sales dropped 36 percent as the brand rolled over very strong openings from last year.