Banking reforms aimed at preventing another financial crisis have failed to make enough progress, the head of the International Monetary Fund has warned. 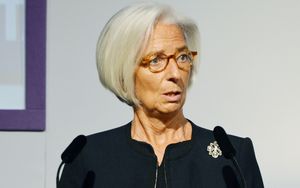 IMF managing director Christine Lagarde blamed a combination of the complexity involved, industry lobbying and "fatigue" for the delay.

"The industry still prizes short-term profit over long-term prudence," Ms Lagarde said at a conference in London on the future of capitalism. She said inequality was "an issue" too.

Ms Lagarde said some of the biggest problems were with firms that were "too-big-to-fail", banks whose collapse would cause such a big knock-on effect on the wider economy that governments were still expected to rescue them.

She said a recent IMF study indicated that such banks were still "major sources of systemic risk" and called for "tougher regulation and tighter supervision" to tackle the issue.

The BBC reports Ms Lagarde called for regulators worldwide to agree a framework to wind down big banks in trouble, as well as mutual recognition on rules for financial markets.

"This is a gaping hole in the financial architecture right now, and it calls for countries to put the global good of financial stability ahead of their parochial concerns," she said.

However, for such changes to be effective, Ms Lagarde said there also needed to be a change in the culture of financial firms, saying changes so far were "not deep or broad enough".