Briscoe Group is planning a little retail therapy of its own, eyeing up a major acquisition this year as it looks to expand its bricks and mortar stores and online presence.

The group, which also owns Rebel Sports and Living and Giving, is one of the most successful retailers in the country and is sitting on more than $50 million in cash. 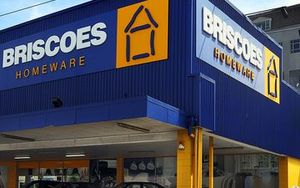 Speaking after the retailer's annual shareholders' meeting in Auckland on Thursday, managing director Rod Duke said some of that money will be used to open more stores, particularly in Auckland and Christchurch.

Some of the cash had also been earmarked for a retail acquisition, but he said a sizeable chunk of it will also spent on a new stock management system, which he hoped would boost sales.

Mr Duke said he was confident the retailer could improve its gross profit margins and its bottom line this financial year.

The group had a gross margin of 38.5 percent last year, which was slightly lower than the previous year.

Mr Duke was confident he could better that this year, through better buying and more hedging of foreign exchange rates.

He said Briscoes spent $US50 million on homewares alone last year, highlighting how vulnerable it was to fluctuations in the currency, but he was determined to reduce that risk.