Paul Harrison at Salt Funds Management said he thought shares were mostly fully-valued at the moment.

"The market appears to be really struggling to find a direction," he said.

"We're waiting to se what some of the results to 31 March look like.

"We got quite a good start to the year in January and February through the (corporate) reporting season, which indicated that companies were doing quite well from October-November onwards.

"The market carried on and rallied, and from here we need to see if the economy's improvement flows through to profitability," he said. 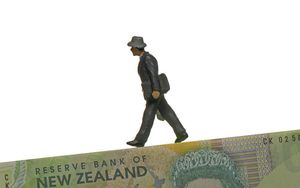 The retirement village operator lifted annual net profit more than 42 percent to $195 million, boosted by gains in the value of its properties as well as rising care and management fees.

The Government's budget left the New Zealand dollar unmoved and investors looked ahead to data due in the United States and other offshore developments.

Markets did not like surprises, but most things in the budget had been well-signalled.

Because of this investors were looking to overseas data, such as US jobless figures due late on Thursday night.