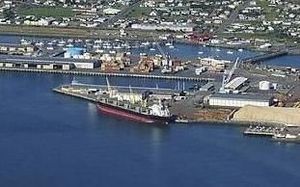 The Bluff port attributes most of the fall to faster throughput of products before the start of its new financial year, affecting its warehouse activity and cargo flows.

The company says there was more rapid movement of dairy, fish and meat product into the market during the previous season, which created low inventory levels at the start of the port's financial year.

"But that was consistent across the whole New Zealand market," he says. "In the three-month period leading up to Christmas of 2013, cargo certainly started to ramp up."