Sky City says lower turnover from high rollers is one of a number of reasons why its first-half profit fell 8 percent. 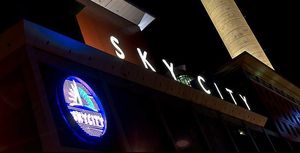 The casino operator's net profit for the six months to December fell to $61.1 million from $66.3 million in the same six months a year earlier.

The normalised result was within the company's December guidance.

Other factors behind the profit decline were the higher New Zealand dollar depressing its Australian earnings and disruption caused by the refurbishment of its Adelaide casino.

Chief executive Nigel Morrison says the high roller issue is a matter of timing and the big players sometimes come frequently and at others infrequently.

Mr Morrison says there has been a good start to the third quarter and Sky City is on track for $6 billion of turnover of international revenue by the end of the calendar year, which will be good growth on the prior year.

He says overall the revenue for the January period is up around 5 percent, even recognising that the Australian dollar conversion has significantly depreciated, without that it would be up 10 percent on a constant currency basis in January.