The centrepiece of the 2014 Budget is a $493 million package aimed at families, which will extend paid parental leave, provide free doctors visits and prescriptions to children under 13, and increase the amount received under the parental tax credit.

Watch John Key and David Cunliffe on the Budget

Finance Minister Bill English, announcing the Budget, said the Government was picking a higher-than-expected surplus in the coming financial year after running six consecutive years of deficits. This year it expects to post a deficit of $2.4 billion before moving into a $372 million surplus next year.

The Budget highlight, the families package, will cost the Government $493 million over four years.

The current weekly rate paid to families would remain the same but the eligibility would be significantly extended, Mr English said.

Leave entitlements will also be extended to those in permanent care arrangements, such as those under Child Youth and Family care, and grandparents caring for grandchildren.

"Parental leave payments will also be extended to people in less regular jobs, including seasonal and casual workers, those who have recently changed jobs, and workers with more than one employer," he said.

Parental tax credits are currently available to many low to middle income families who are not on a benefit, and who are not receiving paid parental leave. The tax credit will be increased from $150 to $220 a week, and available for 10 weeks from the birth of a child, rather than the current eight, at a cost of $42.3 million over four years.

However, as a result of income threshold changes, about 400 families who currently get the tax credit will no longer be eligible.

Those who remain eligible are families earning up to $84,077 for their first child, $99,847 for their second child, and up to $115,616 for their third. However those in the higher ranges of those incomes will not receive the full credit.

From the 1 July next year, GP visits and prescriptions will be free for children under 13, costing $90 million over three years. The Government says this will benefit more than 400,000 children, by including those aged between six and 12. 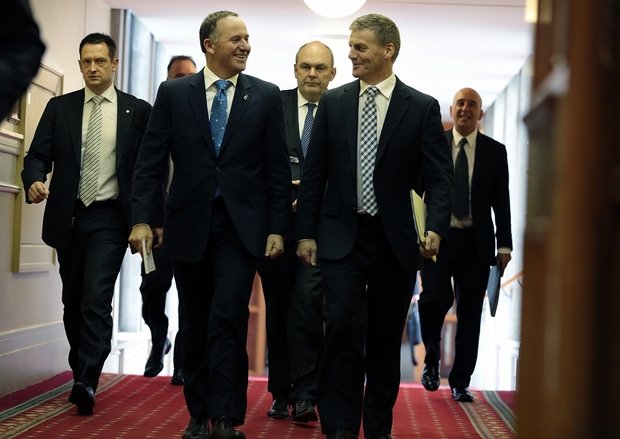 Building material duties to be dropped

Parliament will go into urgency on Thursday night to pass legislation removing duties on plasterboard, wire nails and reinforcing steel bar for three years, effective from 1 July. Tariffs on building products such as roofing, cladding, insulation, paints, electrical and plumbing fittings will also be dropped for the same time period.

This will cover about 90 percent of the materials in a new home, and is estimated to save about $3500 on the construction of a new home. It will cost the government $27.8 million over five years.

The Government will spend $107.5 million over four years on operational funding for social housing, and $18.2 million on capital funding.

The Government is signalling further, possible cuts to Accident Compensation Corporation Levies next year, worth $480 million, subject to public consultation. It says it anticipates the bulk of these cuts could be for employer and self-employed levies, and for motor vehicle registrations, which could be reduced, for a private vehicle, by up to $130 a year from July 2015.

The New Zealand Transport Agency will receive $375 million as an interest free loan, to help speed up the building of motorways in Auckland. That will be repaid to the Crown out of funding already allocated to those projects in the Land Transport Fund up to 2027. Debt servicing for the loan will cost the Government $32.7 million over four years.

Money raised by the partial asset sales programme will be spent on schools, hospitals and KiwiRail this year. Money will also go to a housing contingency fund for Christchurch, irrigation design and construction, the Hobsonville Land Company housing development, the Crown purchase of the Television New Zealand Archive at Avalon and maintenance and repairs at Te Papa.

The Government is picking a higher-than-expected surplus in the coming financial year after running six consecutive years of deficits. This year it expects to post a deficit of $2.4 billion before moving into a $372 million surplus next year.

The Government has confirmed it will have new spending of $1.5 billion next year, compared with $1 billion this year, and that will rise by 2 percent each year after that. It said Treasury had advised that spending track would not put undue pressure on interest rates.

Mr English confirmed that, as surpluses grew, the Government would be able to conduct a KiwiSaver auto-enrolment programme for people who were not members of the scheme.

Contributions to the New Zealand Superannuation Fund would resume once net debt reached 20 percent of Gross Domestic Product, at this stage in 2019/2020. 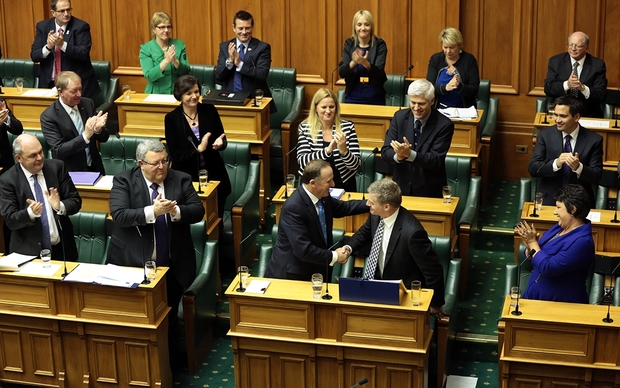 Mr English said the New Zealand economy grew 3.1 percent in 2013, the fifth highest rate among Organisation for Economic Co-operation and Development nations, and is expected to grow between 2 percent and 4 percent each year in the next four years, peaking at 4 percent in the year to March 2015.

He said the unemployment rate was expected to drop to 4.4 percent by mid-2018.

However, Mr English warned the Government needed to concentrate on repaying debt, which was increasing by $75 million each week, compared with $110 million a week last year. He said by 2016/2017 government debt would reach $66 billion, up from $10 billion six years ago.

Mr English later said a National government might be able to deliver tax cuts in a third term - but they were likely to be relatively modest.

"We're not pre-judging the size of any tax reductions or the proportion of the Government allowance that would go to them," he said.

Parliament has gone into urgency to pass legislation enacting some of the main parts of the Budget, including the paid parental leave extension, the increase in the parental tax credit and the number of weeks families can receive it.

The House will sit until 10pm before resuming at 9am on Friday.

Full Budget 2014 details from the Treasury