Police had to physically restrain protesters outside a post-Budget business meeting in Auckland attended by Prime Minister John Key. 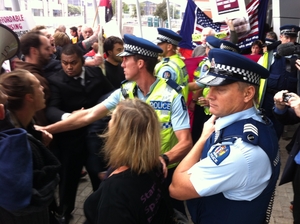 Protesters and police clash outside the meeting. Photo: RNZ

About two dozen protesters swarmed the entrance at Vector Arena and had to be beforcibly removed by police so people could attend the Trans-Tasman Business Circle meeting on Friday morning. One protester was taken away in handcuffs.

The group from Auckland Action Against Poverty organised the picket over welfare policies outlined in the Budget on Thursday, which include the introduction of 354 extra Work and Income staff.

The group's spokesperson, Sarah Thompson, said the Government has offered no solutions to reduce poverty, unemployment and inequality.

Ms Thompson said there needs to be a programme of decent job creation that includes different kinds of procurement policies so that more services like manufacturing are provided in New Zealand.