About 100 demonstrators gathered at Parliament on Thursday afternoon, protesting against planned increases to student loan repayments and child poverty.

As the Budget was delivered by Finance Minister Bill English, they voiced their opposition to increases to the student loan repayments, as well as inequality and child poverty in New Zealand. 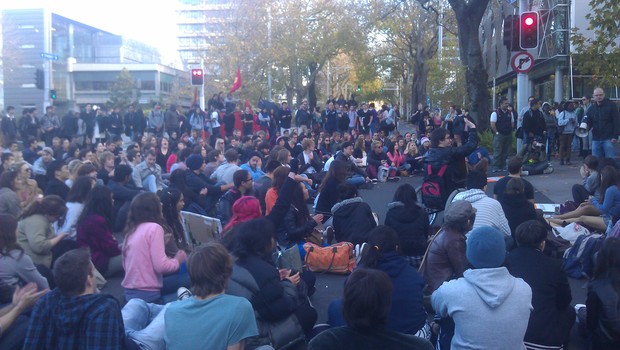 In Wellington, students marched from Victoria University to meet at Parliament grounds with a separate hikoi against child poverty.

Amidst loud chanting, protesters waved flags, balloons and banners bearing phrases such as: "Borrowing to live means debt for life," and "No excuse for child poverty."

They were met by MPs for Labour, the Green Party and New Zealand First, who also gave speeches to loud applause.

In central Auckland, a group of students protesting against the Budget also caused disruption, with Symonds Street between Waterloo Quadrant and Grafton Road closed for a time on Thursday.

Police say traffic in the area had to be diverted and some bus stops temporarily relocated.

The group opposed National's Budget reforms, saying they will hurt not only students, but middle and lower income citizens.