Smokers, families with young children and owners of holiday homes have been hit in the pocket, under changes announced in the Budget.

Finance Minister Bill English delivered his fourth Budget on Thursday afternoon, telling Parliament the changes will mean the Government is on track to have its books back in surplus by the 2014/15 financial year.

The Government is scrapping the childcare and housekeeper tax credit, as well as tightening the rules for the tax deduction of the costs of assets that are used by their owners and rented out for income, such as holiday homes, boats and aircraft. 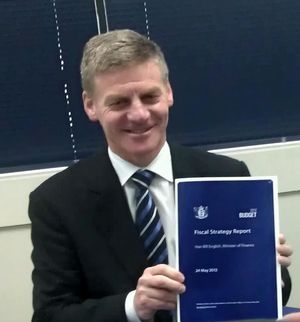 Bill English says the Government remains on target to return to surplus in 2014-15. Photo: RNZ

Smokers will also be affected by a sharp rise in excise tax, which will increase the price of an average pack of 20 cigarettes to more than $20 by 2016.

Mr English told the House that, for the next four years, this tax will increase by 10% per year, beginning on 1 January 2013. This will be in addition to the annual inflation-indexed increase.

The Finance Minister says the 2012 Budget builds a platform for growth, while getting the books back to surplus and reducing the need for more borrowing.

The Government expects tax increases to raise $528 million over four years. Some $20 million will be provided to a new fund, Pathway to Smoke-Free 2025, for programmes to discourage smoking being taken up and to help people quit.

Bill English says the Government remains on target to return to fiscal surplus in 2014/15 and then to start reducing debt. However, next year's deficit of $7.9 billion is slightly higher than previously forecast.

"The deficit then falls to $2 billion in 2013/14 before returning to surplus. The projected surplus in 2014-15 is modest, but the Government will continue working to ensure it gets back in the black because that's when we can start to repay debt."

Mr English says net debt will peak at 28.7% of gross domestic product in 2013/14 and fall in subsequent years.

Budget 2012 will broaden the tax base, with the closure of tax loopholes and the removal of three tax credits.

The rules will be tightened for the deduction of the costs of assets that are used both by their owners and rented out for income, including holiday homes, boats and aircraft. This is expected to save about $109 million over the next four years.

New livestock valuations rules will prevent farmers who change valuation schemes getting an unintended tax break. This measure will reverse what would have been an estimated $184 million fall in tax income over the next four years.

Three tax credits will also be removed. They are: the income under $9880 tax credit, the childcare and housekeeper tax credit and the tax credit for children in part-time work, which will be replaced by a limited exemption. These changes are estimated to save $117 million over the next four years.

The plan to automatically enrol New Zealanders in KiwiSaver in the 2014/15 financial year has been deferred.

It will proceed when the Government has sufficient surpluses to meet the forecast cost of up to $514 million over four years.

The public consultation on the auto-enrolment has also been deferred.

New disclosure rules for KiwiSaver funds will come into effect on 1 April 2013, requiring fund managers to report their performance and returns, fees and costs, assets and portfolio holdings, liquidity and liabilities, and key personnel, along with any conflicts of interest, in a standardised format on their websites.

The terms of reference for a review of KiwiSaver default-provider arrangements was released on Thursday.

A new Future Investment Fund has been established in Budget 2012 to receive proceeds from the partial sale of four state-owned energy companies and Air New Zealand.

This year, it will allocate its first $559 million, with $34 million going to 21st Century Schools, $250 million to KiwiRail's Turnaround Plan, $88 million for health-sector initiatives and $76 million for the capital costs of the new Advanced Technology Institute.

The Government expects to make a significantly larger contribution from the fund, once it has started selling shares in the state-owned enterprises.

The health sector will receive the largest increase in Government spending in the Budget, with an extra $1.5 billion over the next four years.

The Government says this takes the total health spending to $14.12 billion in the 2012-13 financial year, representing an overall rise in expected spending on health of about 4%.

This year's increase includes $435 million for new initiatives and to meet rising costs in the health sector. That figure is made up of $358 million in new money for health, $47 million of savings and under-spends, and $30 million from drugs coming off patent.

District Health Boards will have about $350 million available in the coming year, along with additional funding from the Ministry of Health for service contracts.

In measures announced before the Budget, prescription charges will increase from $3 to $5, up to a maximum of 20 items per year from 1 January 2013.

There will also be $101 million in extra funding over the next four years for more non-urgent operations, improved cancer services and faster diagnostic tests.

Education gets an increase of about $511 million over the next four years to fund new initiatives.

Changes will also be made to teacher-student ratios for Year 2 to Year 10. That ratio will be set at one teacher to 27.5 students. This change is expected to save an average of about $43 million each year over the next four years.

The $4.3 billion spend on Tertiary Education has been rebalanced, with more emphasis on investment in tuition and research and less spending on student support.

Some $158.9 million over four years will be invested in engineering, science and research-led learning.

Budget 2012 will provide $90 million in operating funding and $76.1 million in capital funding to create the Advanced Technology Institute, which is intended to work with the high-tech manufacturing and services sector.

Vote Economic Development has had an overall decrease in funding, which the Government says is due to major projects finishing including the Rugby World Cup, America's Cup support and the establishment of Food Innovation New Zealand.

In addition, two Ministry of Economic Development funds are being cancelled, which will save the $26.1 million over four years.

Those funds are the Enterprising Partnerships Fund and the Transformational Initiatives Fund, set up in 2007 by the Labour-led Government.

The Budget will provide $104 million of reprioritised money to support the growth of non- government housing providers over the next three years.

The Government's Heat Smart programme, which funds the insulation of homes, has been extended and will now fund a total of 230,000 homes - an extra 41,000.

An investment of $287.5 million in the Government's proposed welfare changes was announced before the Budget and confirmed on Thursday.