The Whakatāne community is gathering for a special ceremony to mark two years since the Whakaari / White Island eruption. 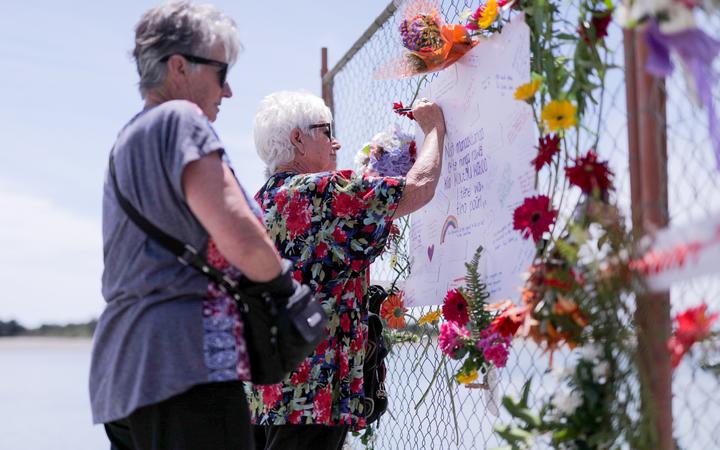 People in the Whakatāne community wrote messages on a makeshift memorial after the eruption in 2019. Photo: RNZ / Dom Thomas

On 9 December 2019 at 2:11pm, 22 people were killed after the volcano erupted with 47 people present on the island, a majority of them tourists from overseas.

Whakatāne District Council has partnered with iwi Ngāti Awa to share karakia dedicated to the victims of the eruption but also to first responders and locals.

Mayor Judy Turner said it was important to remember the heroic actions of those who helped at the time.

"Two years is actually a pretty short time for those who have been most directly impacted, they've lost family members, or they are surviving severe injuries," Turner said.

"First responders who had to deal with some pretty traumatic things on the day, all those people still live with the very vivid memories of what happened."

Te Rūnanga o Ngāti Awa will be leading the ceremony this afternoon and have provided strength and guidance since the eruption, Turner said.

"Ngāti Awa have been an amazing guide for us all as a community regarding how we respond to the grief that we feel, and they were certainly proactive at the time, and we are eternally grateful for the guidance and support that they gave us.

"They have taken it upon themselves to set up a time of karakia and reflection for us."

The region is currently in traffic light red of the Covid-19 Protection Framework, and so gathering sizes for today's commemoration will be limited to 100 people with health and safety restrictions in place.

While international borders have been closed, victims and their families who were directly impacted by the eruption have been unable to return to Whakatāne.

Turner said when the international border re-opens, they would like to welcome back the affected families and honour the victims with a national memorial.

"We're very cognisant of the fact that these people have never been able to revisit the memories in a way so we would like to continue to have December 9th as a time of memorial.

"But we also look forward to the time where perhaps in the future we can have more of a national memorial observance where those people who want to return could be included."

The Whakatāne community continue to reflect on the day of the eruption two years on and share appreciation for all of those who provided help and support.

"We just want to acknowledge the absolute heroism of people who rescued people, who gave medical attention, who transferred people from boats into ambulances as they came back, who flew victims to burns units all-round the country," Turner said.

"It's certainly about remembering ... those of us that live here have not forgotten, we live with it every day and we've got families who live with the consequences everyday."

Te Rūnanga o Ngāti Awa has been contacted for comment.