The art of making sauerkraut

Sauerkraut has been around for thousands of years. The Chinese have been fermenting cabbage for at least 6000 years, Ancient Romans consumed it, and it was a staple for Captain Cook when he explored New Zealand.

They pound cabbage in their farmhouse kitchen, preparing the vegetable for fermentation, while talking to Simon Morton. Added to the cabbage is ginger, garlic, a bay leaf, chilli and some carrot.

Emily and Pip say sauerkraut encourages good bacteria in the stomach and gut. Pip uses sauerkraut to help populate people's gut with healthy bacteria through her work as a natural therapist.

"If you've had to take antibiotics for some reason, something like having a good cultural yoguhurt or sauerkraut is a fantastic way of getting the pro-biotics back into your system again," she says.

Sauerkraut is fermented through an anaerobic process, meaning it develops without oxygen, encouraging the production of lactobacillus, which feeds off the natural sugars produced by the vegetables.

How our sense of smell is a pre-cursor to death, the brain and the development of human intelligence and the latest on Ebola.

The latest exercise is a mix between a disco party, a work out and a visit to the psychologist with instructors yelling positive affirmations at you while you're trying to climb a mountain on your stationary bike.

"There's 800 deaths associated with obesity a week in the UK and in the USA, about the same number every day," Professor Bloom says. 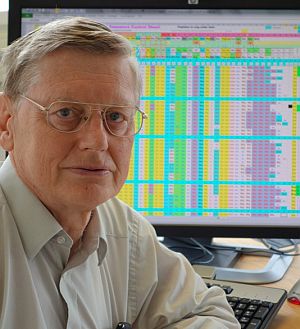 Obesity is the biggest pandemic the world has ever seen according to a leading obesity researcher, but it could be curbed through the implantation of a microchip to trick the brain.

Professor Sir Stephen Bloom is a pioneer in obesity research and head of the diabetes, endocrinology and metabolism division of Imperial College London in Hammersmith Hospital in London. He's  been working on solutions to this global problem.

Lots of health issues have been linked to obesity, including diabetes, hypertension and organ failure. Professor Boom says in the last five years, more research has shown cancer is twice as common in the obese, with uterus cancer being five times more common in those who are obese.

He's working on two solutions to the obesity epidemic that is plaguing not only Australian, New Zealand, The USA and the UK, but India and China too. One uses hormone therapy, the other involves having a microchip implanted.

Professor Bloom says the while the microchip might not appeal to everyone, "in its final setting, it will be like one of those pacemakers for the heart. That's been a tremendous success... so it's perfectly feasible".

New research looks at animal communication and the link to human language - at the moment no one knows how language has evolved.

Dr Arik Kershenbaum explains how animals' bleats, grunts and barks are a lot more complex than we first might have thought.

Bits and bytes with Peter Griffin

Bits and bytes from the tech world with Peter Griffin. Mobile payment systems and why ebay is about to spin off paypal, plus a preview of Windows 10. First, Kim Dotcom's out of politics and now he's getting out of ther music service Baboom.