People often perceive Parliament as a fusty, crusty institution. A marble castle on a hill. The old guard’s last redoubt. That was once probably a fair assumption, until MMP changed everything.

Parliament was once not dissimilar to the reading room at a London gentlemen’s club; somewhere Mycroft Holmes or Sir Humphrey Appleby might snooze over a snifter of brandy.

The MMP Parliament is younger, much less white, and (don’t tell Mycroft) but it's one MP short of 50 percent female. Forsooth! But perceptions and a sense of engagement and connection don’t automatically change along with it. Luckily Parliament has some secret weapons. 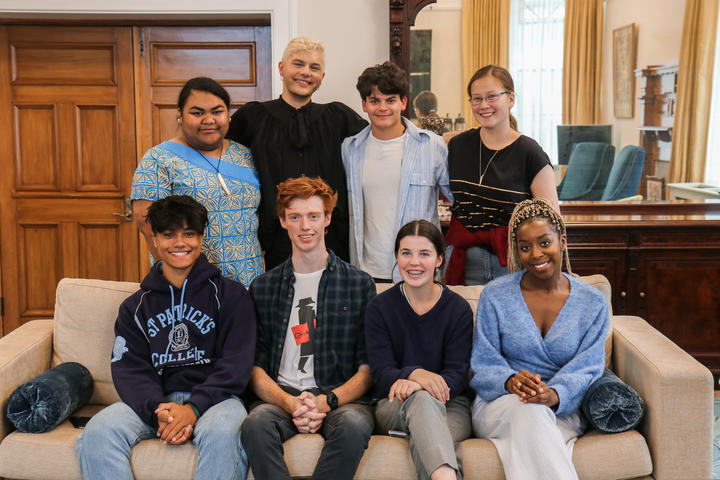 Young people feel especially disconnected from politics, and from what happens in the marble castle on the Kaiota hill.

Parliament wants to change that but it also knows that young people are not impressed by fogeys’ ideas of what they need. So Parliament went to the source for advice.

They brought together a group of young people to find ways to do two things:

The team are known as Rito (the new, central shoots that emerge in harakeke/flax, and without which it dies).

Rito 2021 was the first Rito year and is now nearly finished. But with each new year a new Rito team will emerge with fresh ideas.

Rito member Cornelia Sartie says that swapping out is important. “There is so much more that can be done, …there are so many other great perspectives that we could be missing.”

In fact applications are now open for anyone aged between 16 and 20 for Rito 2022.

You might want to be involved - so to help you decide I asked Ed Nelson and Cornelia Sartie about Rito 2021. (Embedded along the way are videos Rito designed as part of their efforts.)

The pilot year group were all from the wider Wellington region but for 2022 they want to take it wider, says Cornelia.

“If we really want to get youth engagement and get a diverse perspective, obviously we have a whole country to do that, so it would be great to get some ideas from all around the country.

“We’ll be keeping two people on from this group to show them the reins and carry on the project, but apart from that it’ll be new young people with different perspectives, which will be great.”

To begin their year they met with various senior MPs and got a taste for the place, and then followed MPs and staff along on a select committee outreach to a high school so they could watch and tell them how to improve.

“Having a look at how it was being done, perhaps the style of presentation and how in future that could be shaped differently to increase how people were staying engaged.”

I asked whether part of the youth engagement problem was that Parliament looked old fashioned from the outside. Cornelia agreed, and she wanted to change that but also to see past it.

“Parliament on its own might seem a bit boring but the greater idea of what it stands for is something that all of us can engage with.”

Along with telling Parliament how to improve their community connection they also wanted to show young people what  can be achieve by engaging with MPs. So, Ed says, they created some videos to show “different ways that young people can engage with Parliament.”

“As young people we can’t necessarily see ourselves in Parliament …so the big idea with the Rapara series was showing ...how young people have engaged with parliament in the past. We found a group or an individual that had achieved something - that had taken action, and we told their story. …these powerful changes have taken place as a direct result of young people.”

The video outcomes from the Rapara project are embedded in this article.

I asked Ed and Cornelia what they would change about Parliament (without any limitations), to increase young people’s engagement.

Ed Nelson thinks that one of the most crucial things is already occurring and expanding: the move to online engagement. He thinks that online resources and connections to democracy will increasingly encourage young people to be involved, and make it easier.

Cornelia had ideas towards further shifting the make-up of MPs, to "make Parliament more representative as a whole."

"I think what young people and some minority groups are affected by is that they don’t see those voices that represent them in Parliament. I think that is a big, big issue that isn’t just a matter of electing the right person.”

“I think from a young age we need to increase civic engagement, …we need to show young people that this is a part of …democracy that is for them.”

As part of this shift she would modernise and simplify the language that Parliament uses so that it is less distancing to those “outside-looking-in.”  Together, she thinks those things would help normalise the institution.

“So [you] don’t think that it’s just one sort of person that is designed to be in Parliament [because] you can see yourself represented.”

Two of the eight members of Rito 2021 are staying on to help out the newcomers, so Rito 2022 is looking for six new young members.

If you are 16-20 and have opinions about how Parliament could better connect with your peers (and vice versa), you should probably apply to be part of Rito 2022.

Applications are open now and close on November 21st. You can find out more about RITO and apply for Rito 2022 here.