Election day is just over three months away and the Government is ramping up its efforts to finish off the bills on its to-do list. 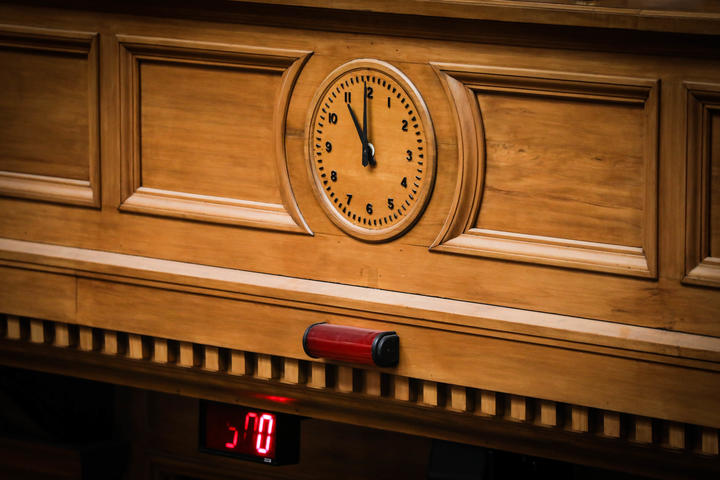 One of the clocks in the debating chamber. The timer underneath lets MPs know how much time they have left for their speech Photo: VNP / Daniela Maoate-Cox

One way the Government can do this is to extend the time MPs are in the chamber.

“That allows the Government to push one day’s sitting into the following morning. So typically on a Tuesday Parliament would finish at 10pm and then it would resume at 2pm the following afternoon for the next sitting day,” said Leader of the House Chris Hipkins.

“Under extended sitting we can push Tuesday’s sitting into Wednesday morning so while you break at 10pm you come back at 9am the next morning and keep on going from wherever you’d got to at 10 o’clock the night before.”

The ability to extend sitting hours has existed since 2011.

Concerns over the amount of time the House had to get its work done and over an increasing use of urgency had been voiced for some time.

Urgency means a bill can be passed more quickly than usual and can skip a select committee process which often involves public consultation.

Extended sitting hours means the Government can arrange for extra time to work on bills without truncating the House’s ability to scrutinise.

So the MPs finished up at their usual time of 10pm on Tuesday evening but turned up again at 9am today.

The decision to extend sitting hours is normally discussed by the Business Committee. A committee which has members from all the parties on it which discusses, as the name hints, business before the House.

The committee is chaired by the Speaker of the House Trevor Mallard and works on near unanimity.

Its determinations can include switching MPs between select committees, giving committees more time to report back on bills or extending sitting hours.

To actually extend the sitting hours the Leader of the House Chris Hipkins had to move a motion House which the MPs voted on.

When sitting hours are extended by a motion in the House the Government has to list everything it would like to work on.

Six bills were on the list to work through during the extended morning sitting but there’s never a guarantee that all of them will be finished.

When the House adjourned at 1pm it had managed to tackle two.

It completed the committee stage of the Arms Legislation Bill which sets up a national register and a tougher licensing regime.

And it got halfway through a debate on the second reading of the Electoral (Registration of Sentenced Prisoners) Amendment Bill which will enable some prisoners to enrol to vote.

The MPs returned to the chamber at 2pm for a normal sitting day.