Hold on to the big crayfish

In 2011, Michael Parekowhai won a commission for the fifth anniversary of the Brisbane Gallery of Modern Art – GOMA, Australia with a five metre bronze sculpture called The World Turns featuring an elephant and the native indigenous rat, the Kuril, that incorporated by their depiction - an African Myth with an Aboriginal Dreaming story. Almost immediately there was an outcry from Indigenous Aboriginal and Torres Strait Islander Arts practitioners questioning the commissioning process and relevancy of the work. An intense debate about cultural appropriation, cultural cringe and the continued invisibility of Indigenous Aboriginal and Torres Strait Islander Art within Australia followed, fuelled by Parekowhai’s lack of engagement in any of the subsequent dialogue.

In this week's episode of Te Ahi Kaa we present The Elephant in the Room (2012) produced by Awaye! The Australian Broadcasting Corporation (ABC) Indigenous Arts and Culture programme. Hosted by Daniel Browning the documentary features Sam Watson, Djon Mundine and perhaps the most vocal of critics, curator and academic Fiona Foley.

In a visit to New Zealand earlier this year, Foley called out Parekowhai in a New Zealand Herald article (April 12, 2014);

…the piece became very problematic, because now you’ve got a Māori artist referencing Aboriginal culture but there is no consultation in that process. I’d love to have a conversation with him but he didn’t avail himself, and culturally what he did was theft. He stole part of a dreaming story, and he is accountable for his actions, and I want his people in New Zealand to know what he did in Brisbane.
I am not invited to Auckland to do a public work and stick a big dingo up on a marae. Culturally it wouldn’t be done. 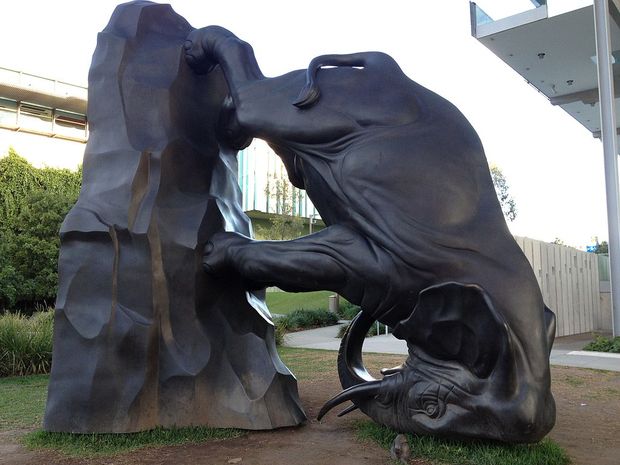 The World Turns by Michael Parekowhai (2012). Photo Kgbo via CC