In the vales of darkness seek learning and understanding it is wisdom, it is life.

The White Ribbon Ride is about taking the anti-violence message to communities across Aotearoa. A group of Māori health and social workers, Te Ahi Kikoha is taking part, Justine Murray talks to Takurua Tawera from their stopover in Hawera. 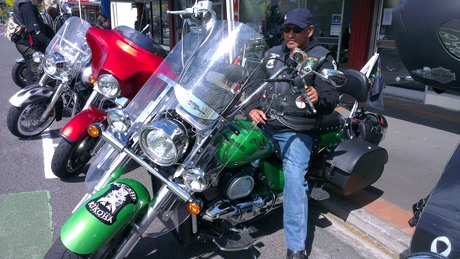 Takurua on his Boulevard Motorcycle part of the West wind in the White Ribbon Ride campaign.
(Photo courtesy of White Ribbon Campaign.)

Te Puia – The New Zealand Māori Arts and Crafts Institute in Rotorua celebrates its 50th anniversary this year.  In an interview from 1963, Jean Abley interviews its first Director Mr P.H Leonard.  In an interview from 1980, weaving tutor Emily Schuster explains with Haare Williams how she attained and created pā harakeke for use at the institute and Rotorua marae.