If kindness is sown then kindness you shall receive

In the last Te Ahi Kaa for 2011, Maraea Rakuraku and Justine Murray present few of their favourite stories covered during the year.

Justine Murray learns a lot more about Riwai or Taewa (potatoes), she joins Dr Nick Roskruge harvesting this year’s crop.  Bubbly  8 year old Hinetaapora Short debuted this year as the New Nestle Milky Bar Kid, she’s also multi-lingual and wants to be an actress, she has chat about her other goals with Justine.

Iwi Ngati Awa welcomed back their Whare tupuna, Mataatua after the structure was dis-assembled and spent 125 years travelling the world and housed in other museums. At the forefront of its return was Sir Hirini Moko Mead, Maraea has a chat with him in the lead up to the official opening that was in September. Since she learned of the plans to drill oil along their Iwi coastline Te whānau a Apanui lawyer Dayle Takitimu has had little rest.  She talks Iwi strategies with Maraea.  Ngapare Hopa reminisces about those who have supported her education and Ani Mikaere reminds us of the damage colonisation has done to tikanga Māori and the vigilance we must exercise to correct it. Tyna Keelan cracks us up with the history behind his song, East Coast Girls and Cornerstone Roots bust out a number from their latest album, Future is Now.

This year our travels included visiting a few Marae in Aotearoa.

Last summer, Te Oreore Marae in Masterton was under threat as a fire broke out only tens of metres from the building, luckily any damage to the marae was avoided thanks to the quick response of the fire service, Justine checks out the damage to the nearby scrub and bush with Jason Kerehi.

Waiata featured:      Get up performed by Brian Ruawai recorded at RNZ studios on 9th December 2011(pictured below) 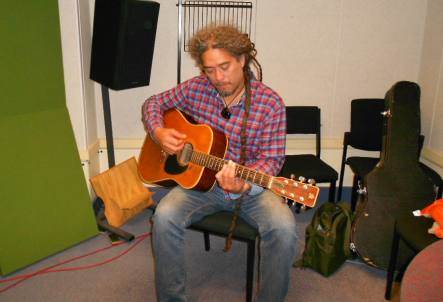