"Tawhiti rawa i to tātou haerenga atu te kore haere tonu, maha rawa o tātou mahi te kore mahi tonu."
"We have come too far to not go further, we have done too much to not do more"
This week's whakatauki is explained by Naida Glavish (nō Ngāti Hine, Ngāti Whatua)

Maraea Rakuraku meets the entrepreneurial Kauta whānau of Omaio in the Bay of Plenty. This family is committed to creating employment in its rural community rather than joining the drift to the cities, and its work combines a love of book restoration with pig-dog training. Maraea learns why the whānau has shied away from the typical nine-to-five workday. 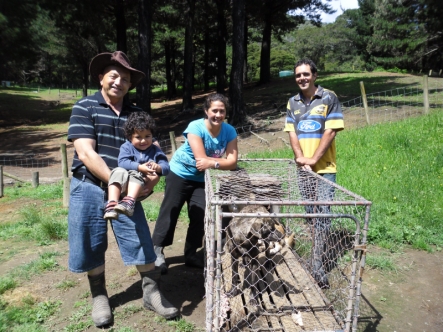 The Kai in the Bay Māori Wildfood Festival offered up a smorgasbord of food to Napier residents and visitors. Among the offerings ― oysters, venison, rewena bread, hangi food and even pikopiko-inspired chocolate. Justine Murray takes in the day's festivities at Ahuriri, where following a cooking demonstration, she meets television chef and author Anne Thorp.

As the 2011 Rugby World Cup nears, billboards and branding are starting to pop up around the country and the Ministry of Māori Development Te Puni Kōkiri is getting in on the action. Justine attends the launch of the official Rugby World Cup 2011 Māori merchandising programme.

Stan Walker's second album From the Inside Out is reviewed by Lisa Collins.

Inside Out, With me, The One, Stuck in a Box, Unbroken, Choose you performed by Stan Walker on his album, From the Inside out (2010)