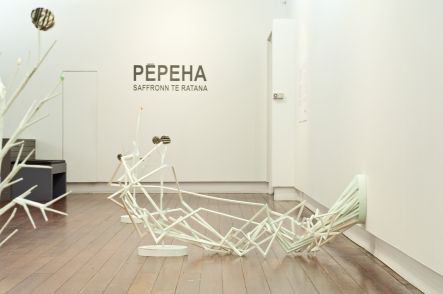 Image published with permisson from the Suter Art Gallery.

The love Tūhoe artist Saffronn Te Ratana has for her iwi is evident in everything she does, whether it's her art or her whānau, and at times they seem to collide in an unconscious synchronicity. As is the case with her first solo exhibition, Pepeha, inspired by her son Maungapohatu (who is named after the paramount Tuhoe mountain), which showed at The Suter Art Gallery in Nelson during September and October 2009. Justine Murray is with the curator of the exhibition Anna White nō Te Ati Awa.

Experiences at boarding school can haunt its old boys for years and often not in a good way. That isn't the case for Piri Sciascia. Heenjoyed his time so much at Te Aute Maori Boys College (1960-1965) he stayed on an additional year in his seventh form. An additional year in the seventh form? Selected for the 2009 inaugural Te Aute First XV leaders, Sciascia fills in Justine Murray about that, as well as some of his more mischievous antics.

Ingrid Collins nō Te Aitanga a Hauiti, Nga Pūhi was thrilled when the Farm Trust that she heads, Pakarae Whangara B5-now known as Whangara Farms-was named the 2009 winner of the prestigious Ahuwhenua Trophy in Beef and Sheep farming. She shares tales of her upbringing at Whangara Pa with Maraea Rakuraku.

Waiata featured: Akonga as performed by Hinewehi Mohi from the album