October 15, 2007 had a profound affect upon the Eastern Bay of Plenty community of Ruatoki. It's predominantly Tūhoe residents awoke to find themselves, surrounded by helicopters and armed offenders squads sweeping through their properties. Those leaving Ruatoki were stopped by armed police, had their photographs taken next to their vehicles before they were able to continue on their way. It was described by one resident as terrifying another, as being reminiscent of a war zone and it destroyed whatever trust the community had with the police.

That was a year ago, what about now? Well according to Tūhoe Spokesperson, Taamati Kruger while relations still remain tense, steps are being taken by both Tūhoe and the Police to redress what took place that day. Maraea Rakuraku asks Kruger about the Tūhoe position on that issue and what could be construed as the "hijacking" of the kaupapa, by some of those labeled as Urewera 17.

Te Ati Awa scholar Alice Te Punga Somerville lectures at Victoria University in Wellington and is one of the contributors to a book, Terror in Our Midst? Searching for Terror in Aotearoa New Zealand (Huia Publishers, 2008). She recites two poems, Good cop- Bad cop and Throwaway lines reflecting her observations of October 15, 2007.

Last year (Rangiteremauri) Rangipuke Tari attended Nga Taonga Toi a Te Waka Toi to support friend and whanaunga, Paora Kruger when he received Te Tohu Aroha mō Ngoi Kumeroa Pewhairangi for contribution to Te Reo Māori. This year, Tari was named one of the five recipients of the Sir Kingi Ihaka award for the input he has had in the development and retention of Māori arts and culture. More specifically, his role as a gifted orator, composer of waiata and founding member of Te Hui Ahurei a Tūhoe. 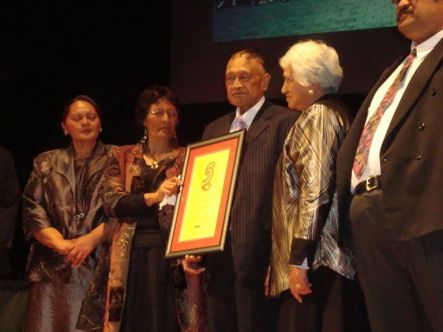 Te Puru as performed at Nga Taonga Toi a Te Waka Toi on 12th September, 2008 by the whanau a Rangipuke Tari.