Kimbra on the No 1 smash hit she never saw coming

It's been 10 years since Kiwi musician Kimbra hit the top of the New Zealand music charts - and those of myriad other countries around the world - as vocalist on Australian singer/songwriter Gotye's smash hit Somebody That I Used To Know.

The music video is sitting at over 1.7 billion views on YouTube and the song is one of the best-selling digital singles of all time.

From her base in upstate New York, Kimbra tells Jim Mora how the hit song had a profound impact on her career. 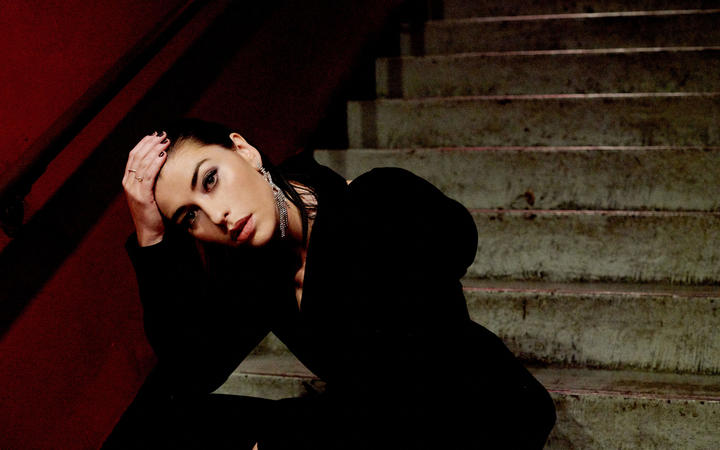 Kimbra says Gotye already liked her voice from her previous work but pushed her to try a vulnerable and conversational style which she wasn't used to.

"Looking back, I'm really glad he pushed me to try that."

From humble beginnings of recording it in her bedroom, the duo managed to take out "game-changing" awards, which Kimbra says became a big crossroads for her.

"It's wild, it really shows you never know where something is going to land.

"My career really shifted after that point. I was playing to crowds that were beyond my wildest imagination and it kind of didn't stop after that, things just continued at a very intense pace."

Although she felt it was special from the start, she says she never could have predicted the success it had.

"I admired Gotye's experimental work and I was a big fan of his more rhythmic and driven songs, so when I heard this song I though 'oh it's a ballad and maybe it'll be track number six on the record, just a slow burner in the middle'," she laughs.

"I could never have imagined what would happen with that song, it never crossed my mind.

"People say they saw it coming, and I just roll my eyes because I think it's absolute bulls--t."

The unpredictable and fresh sound are some of the reasons why Kimbra believes it resonated with listeners.

"This was a song that made you wait two damn minutes before the chorus hit.

"I think it's what's cool about this song, it was kind of organic, people really were sharing it in the space, it wasn't manufactured by a record label.

"I think the fans made it a hit, I think people online sharing that back and forth, and celebrities talking about it, I think that's what created a buzz.

"And then you know what, radio stations can't not play that, when everyone's demanding it that much and when they see that much hype on the internet, they'll get in on it."

At the same time, Kimbra says she has often felt out of place in the pop world with her unique style.

"I don't know if it's hard, it's just that there's not a template set up for people who don't fit into genres - even on Spotify, everything is just so genre-based.

"Sometimes I don't really know where my music fits but it's nice that at this point there seems to be an audience of people who don't really care where it fits, they just connect with the message in the song."

And fans continued to support her throughout the pandemic, during which she also caught Covid-19.

"I think I feel more grateful [for the support] than ever now when I've been cut off from fans and not able to perform for nearly two years, knowing that people haven't forgotten about you and they keep supporting you through all this, it's pretty special.

"I was very sick for 10 days. It's been a rough couple of years for everyone and I really feel like things are starting to change over here and that's exciting."

She says it's been a sobering experience living in the United States, where she was inspired to start a series called Down the Rabbit Hole which discusses systemic racism.

"As white folk, I think we have a responsibility to do our bit ... a lot of the time I used to remove myself from conversations because I used to think well who am I to talk about American politics, I'm a New Zealander.

"I sort of hit a moment where I was like this is my place to speak also, in fact maybe of extreme importance that I speak on the issue. So I just opened up conversations to really learn.

"I feel a little sad that I've had to drop that off a little bit as of late, but it's something that I'd like to keep up and even more importantly, would like to get more involved with that side of things in New Zealand."

Off the back of an intimate tour in the US, Kimbra will be heading to Dubai to represent New Zealand at Expo 2020 in October.

She'll also be premiering her fourth album but wouldn't give clues as to when it would be released other than "soon".

"I'm really feeling excited to get new music out again, that's really what it's all about for me, just continuing to produce and connect."