Northwest Passage: 'Just tell me I'm not going to die'

When ocean racing skipper Ross Field retired from pro sailing, he was already looking for his next, unusual adventure. In a dusty boatyard in France, he bought a 20-year-old aluminium yacht.

Yachting journalist Rebecca Hayter followed his refit in detail. Then she signed on as crew for Field's attempt on the treacherous Northwest Passage - providing Field could confirm that she wouldn't die at sea.

Her new book, Wild Seas to Greenland, details their sailing adventure and she tells Jim Mora that, although she thought only yachties would be interested in story, she’s increasingly found the readership spreading. 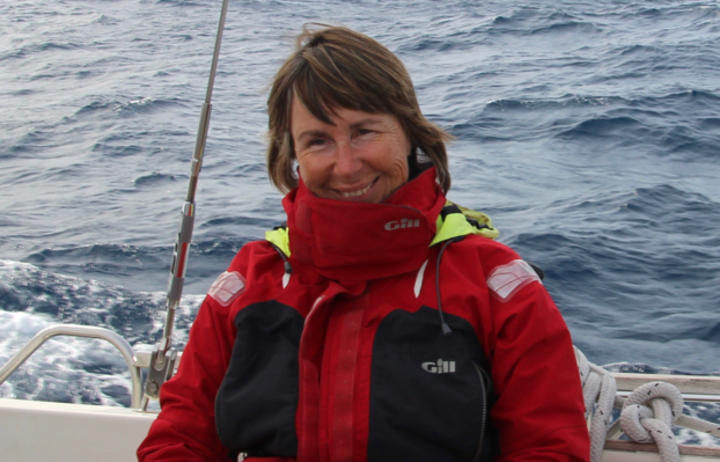 “[Ross] is an interesting character. He’s got adult ADHD so he’s always thinking. There’s always some plan or project underway and he can be quite funny but, man, he can be tough.

“The funny thing to me is that he’s used to sailing around the world with, literally, some of the best sailors in the world and here he was with me – and I’m pretty amateur at sailing – but he’s really patient if I do something stupid, which is most of the time.”

Hayter says that when Ross first asked her if she wanted to do the Northwest Passage with him, she said no.

“I knew it was a fantastic adventure, but I also knew what can go wrong.”

She says Ross wanted her because she could make up a part of the crew with her sailing experience but also because he wanted a journalist to document the passage.

“He said, ‘you’ve picked up knowledge from me in the way that I run the boat that can help save lives at sea, especially with the weather routing’. He feels quite passionate about that. Whenever we hear of a sailor that dies at sea, we all feel it but he really feels it.”

The Northwest Passage is a difficult trip to plan, if it can be planned at all, because it’s never clear whether or not it will be open.

“We sailed from England and, as it happened, we went to Ireland to miss some bad weather, then you set off for Greenland. It’s really hard to get a lot of information about it before you go.”

The crew encountered navigation issues including the wrong kind of compass which was thrown off by the magnetic fields of the North Pole and inaccurate electronic charts of Greenland.

“Most of them had no details on the chart, there was only a few that actually had the details like depths, rocks, and hazards. We found out later that it was because when the Greenland and Canadian governments started transferring the paper charts to electronic charts, they knew there were a lot of mistakes in them, and they didn’t want to be responsible for them, so they just left all those areas out.

“Of course, when Ross got the charts in England, they looked fantastic. It wasn’t until we started looking at the more obscure places that you realise there was no detail.”

The crew hit some stormy weather in the ferocious North Atlantic Ocean and, at one point, Ross told Hayter not to look behind them because the waves were so large.

On the whole, however, the passage was relatively smooth sailing for the group.

“It was alright because the boat was so well prepared and because Ross put so much time into weather routing. We were never caught out, we were never taken by surprise, nothing ever broke. That’s pretty unusual.”