The global manhunt for the real life Jack Sparrow

'Pirate King' Henry Every pulled off one of the greatest robberies in history 350 years ago. It was an event that sparked the first ever global manhunt and changed the course imperial and mercantile history. 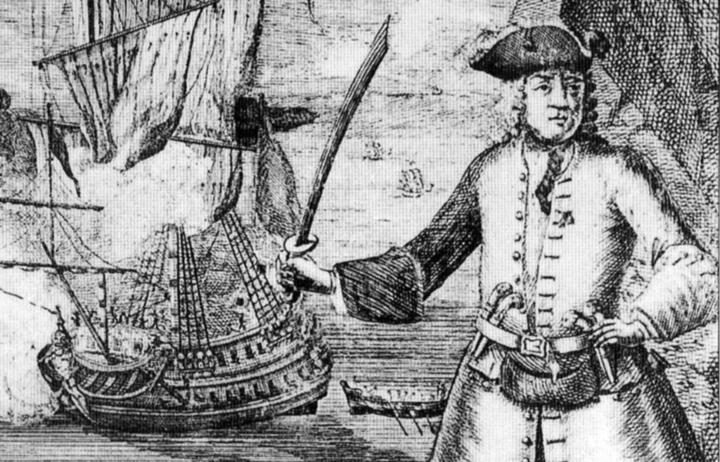 Enemy of All Mankind is the new book by American author Steven Johnson, which looks at Every and the mystery that surrounds him.

Nevertheless, echoes of his acts reverberated for decades and decades, says Johnson.

Every was an experienced seaman and had served in the Royal Navy when he winds up on a ship, the Charles II, a privateer warship in 1694.

The ship, docked in Spain, gets caught up in a bureaucratic snag, Johnson says.

Amid this growing frustration, Every decides to lead a mutiny. His crew take over the ship, rename her The Fancy and set sail for the Middle East.

They anchor off the mouth of the Red Sea, specifically the strait of Bab-el-Mandeb.

“It was a particularly lucrative place to show up if you were a pirate, because you would have these ships coming back from Mecca - it’s a very narrow spot there in the straits of Bab-el-Mandeb.”

When Every and his men show up there’s a small armada of pirate ships lying in wait and the captains of the other pirate ships elect Every as leader.

At the time the Mughal emperor Aurangzeb was the richest man in the world and his heavily-armed ship the Ganji-i-Sawai was returning to India from Mecca laden with riches.

It was far more powerful than The Fancy – but as the pirates engaged with the treasure ship two pieces of luck befell Every.

One of the cannons on the Ganji-i-Sawai explodes killing men and sowing confusion, and a lucky hit from The Fancy knocks over the treasure ship’s main mast effectively disabling it.

“So, what was clear mismatch between these two vessels suddenly swings in Every’s favour, and his men are able to storm the ship and take control of it.”

Once on board the pirates find extraordinary amounts of treasure and also a number of women—members of the Mughal’s court who had been making the pilgrimage to Mecca.

Every’s men, for a several days, engage in terrible acts of sexual violence. They rape a number of the women, some of whom commit suicide to avoid being violated and tortured by the men to find out where treasure is concealed.

“Every does not participate. He stays on board The Fancy, but by the end of it he must have realised he had suddenly become the most wanted man in the world.”

“Sir Francis Drake was a mass killer of the first order, but he had been knighted on his return to England and was considered a great hero.”

But when the Ganji-i-Sawai returned to the Indian port of Surat the atrocities that took place on board started to emerge. A journalist, Kafi Kahn, wrote up an account of the victims.

“He wrote up the account of the victims on Ganji-i-Sawai, including these stories of sexual violence and word of that got back to Aurangzeb."

The Mughal is enraged and he believes that the British are turning a blind eye to piracy—and he wasn’t wrong, Johnson says.

“As long as you don’t attack British ships, we’re fine with you being a pirate, that was the lesson of Francis Drake. You could be a pirate your whole career and knighted when you get home.”

The Crown realises it has to be seen to crack down on piracy if it wants global trade to flourish.

“Had the East India Company been evicted at that point the odds of the British Empire forming in India the way that it ultimately did would have been greatly reduced.”

Every and his men had got away with a fortune estimated to be between $US50 million and $US200 million in today’s money.

“It almost certainly ranks as one of the most lucrative heists in the history of crime.”

News of the heist reached England and Every became a folk hero. There were even rumours that Aurangzeb's granddaughter had been abducted by Every and was living with him as his wife.

At the time ‘Ballad Mongers’ would sing topical songs on the streets, a kind of early tabloid journalism.

“Back in 1695 there weren’t that many famous people … pirates kind of became the first celebrities in this early tabloid medium, they made a lot of money selling stories about these pirates and their exploits at sea, and Every for a period became the most famous of all of them.”

The manhunt, which took months to get underway, failed to track Every down.

“He had a tiny advantage [a head start] and he did one bold thing he stopped briefly on the island of Reunion near Madagascar and traded some of the gold, he picked up some slaves there so that he could pose as a slave trader and then sailed all the way to the Bahamas to modern day Nassau without stopping.

“He was afraid if he anchored in one port of call somewhere the authorities would be looking for him, he thought there was a corrupt governor in the Bahamas where he could buy his way into freedom and ditch the boat.

“It turned out to be true. There was a guy named Trott who was indeed corrupt, and Every was able to escape we believe to Ireland and then he pretty much just disappears.”

Some of Every’s men were caught and tried—but Every vanished.

“Every inspired the famous generation of pirates that show up a few decades later—the Blackbeard generation. Many of them as young boys had heard about the Pirate King as he was sometimes called. The successful pirate who had gotten away with it and retired with his Indian wife to rule over a pirate kingdom in Madagascar.

“All these fantastic stories, there were plays written about him, there were songs, there were poems, he was a major figure in the culture at that period, but he remains a mystery.”