Why the body reacts 'remarkably well' to overeating pizza

What happens when you gorge on a full size pizza with all the trimmings? A researcher out of the University of Bath says not what you might think. 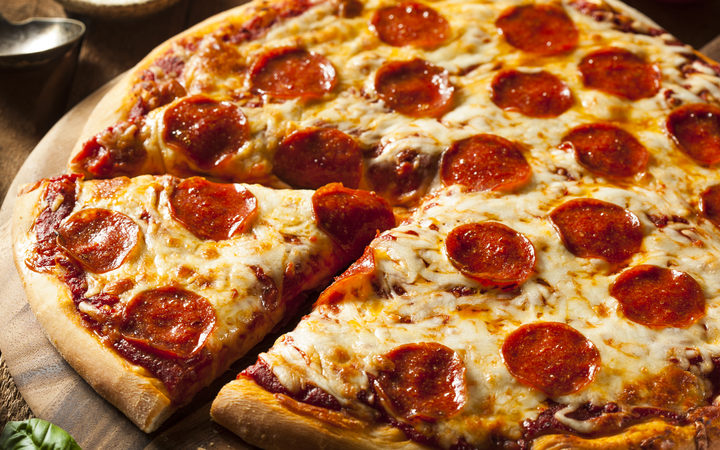 Very little is known about the effects on the body immediately after eating a very large meal, so researchers from the University of Bath, including Aaron Hengist, decided to find out.

Hengist told Sunday Morning pizza is tasty, it's calorie dense and each bite has a similar combination of nutrients.

Those who took part in the study were told to eat pizza until they just simply could not eat any more.

"In one of the trials, we got people to consume as much as they wanted to eat, and then in the other trial we asked them to eat beyond that point of fullness until they couldn't eat another bite."

In one trial, the participants managed to eat a total of 1500 calories when they were asked to eat until they were full - just shy of one large takeaway pizza.

The others, who were eating until they just couldn't, were consuming 3000 calories.

"From this we can kind of say when you feel full, you're probably only half-full," Hengist says.

"Some people managed just under 5000 calories, which is two-and-a-half large takeaway pizzas."

That's two whole days' worth of energy in a single meal.

Hengist says eating so much pizza is a marathon, you hit a wall at two-and-a-half pizzas.

"A lot of people came into the study with the prospect of free pizza being quite an attractive one and certainly they enjoyed the full trial but when we asked them to push past that it was a challenge for a lot of people, we had a lot of grumpy participants feeling quite sleepy and lethargic..."

While they may have felt uncomfortable, Hengist says their blood and glucose levels were no higher than after a normal meal.

"We were quite surprised by this."

Insulin is the hormone which is keeping the blood sugars stable, he says.

"Insulin is the hormone that is released from the pancreas and its job is to regulate blood sugar levels so when the pancreas senses that blood sugar is rising, which it will when you start eating pizza, it releases insulin to work and reduce the blood sugar to a normal level.

"Because the participants had a healthy metabolism they were able to regulate the meal really well."

It's possible the nutrients in pizza and the sheer volume of the meal were telling the body to slow down its digestion, he says.

The study participants were all young men and Hengist says the body may struggle more if someone is living with obesity or overeats more frequently.

Medically trained people were on site during the study.