It's been a tough time for the British royal family of late, with Prince Andrew laying low in the wake of sexual misconduct allegations, Prince Harry stepping down as a senior member of the Royal Family, and a new study showing the royals are pretty much useless at raising money for charity.

However, there is a ray of light in the form of Sophie, Countess of Wessex - the wife of the queen's youngest son Prince Edward - who is being tipped to steady the royal ship.

Author and foreign correspondent Christina Lamb joined her on a recent trip to South Sudan.

While the journalist was not normally a royal correspondent, she said she joined Sophie on the trip as they were both interested in the issue of sexual violence in war.

Lamb said before she met the Countess, she was sceptical about her intentions and wondered if she was just in it for the publicity - however, she found she was "clearly very genuine about the issue", after returning from a trip to Sierra Leone.

"She was in tears talking about a woman she had met there who had been raped just a few days before her visit," Lamb said.

When Sophie proposed the visit to South Sudan, Lamb was surprised as the country was still at war and attempting to negotiate a peace agreement.

As far as royal visits go, this was definitely a risky choice of destination - ad Lamb did not expect the trip would go ahead.

The only royal trip she had previously reported on was Princess Diana's visit to Angola in 1997 - where she visited some very "difficult areas", but as she was no longer a member of the royal family following her divorce to Prince Charles, it was her decision to go.

"As one of Sophie's staff said to me, this is a much grittier issue than royals normally take on," Lamb said. "So I thought it was quite unlikely that she would go there in the end."

However, the trip was approved and the pair travelled to South Sudan together in March this year.

South Sudan is the newest country in the world, established in 2011 following interventions from another famous name - George Clooney.

Clooney had visited Sudan during wartimes and was horrified by the atrocities he saw. Using money from his contract with Nespresso, the actor set up a satellite to monitor the abuses, which then presented information to lobby politicians with.

"And that in the end led to this US-brokered deal for a referendum on independence in 2011," Lamb said.

Despite optimism at the beginning, various groups in the country began fighting again.

"Unfortunately, one of the characteristics of the fighting in South Sudan has been the abduction of women and rape of women and young girls," she said.

"Women often suffer most in war but this has been particularly brutal for women."

While in South Sudan with Sophie, Lamb visited various projects - including one for men, to try and "persuade them of the importance of women" and another that provided girls with money to go to school.

The pair met with officials involved in the British-led girls' school program, who raved about how many girls were attending as a result.

"Then we had a separate meeting, a roundtable with some of the girls and we heard a completely different story of how the boys stole the money from them, that their families took the money." 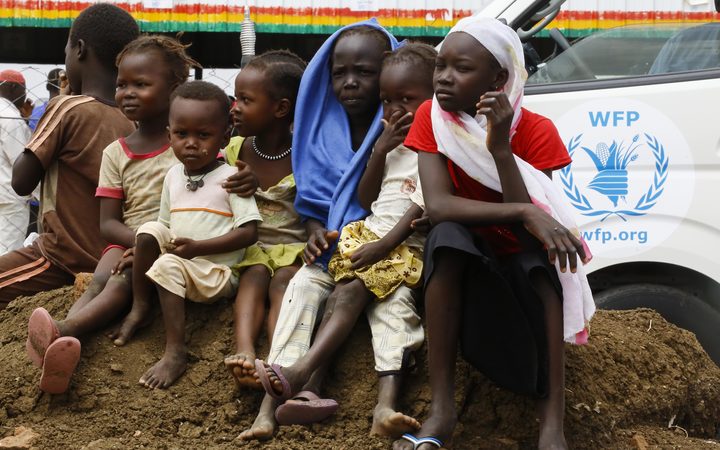 Displaced children sit at a camp near Kadugli, the capital of Sudan's South Kordofan state Photo: AFP or licensors

In order to get her audience interested in the issues faced by women in South Sudan, Lamb said she had to draw in Sophie's royal background and history.

Much like Meghan Markle, Sophie had been a target of the British tabloid press in the past - starting when a photo of her topless in the back of a car was published by The Sun in 1997.

In 2001, the royal attracted more negative attention when she was taken in by "fake sheik" Mazher Mahmood, an undercover journalist who posed as a wealthy client at Sophie's PR firm.

Wessex started offering "rather candid" opinions about then-prime minister Tony Blair and his wife, which were eventually published by the News of the World.

"It was known as the Sophie tapes and was a massive embarrassment for them and the royal family and they literally kind of disappeared from view overnight."

However, according to Lamb, Sophie has gone on to become one of the Queen's more favoured people - and her marriage to Prince Edward is the only marriage that has survived out of all the Queen's children.

When asked how much influence royals could actually have when it came to issues like war rape, Lamb said Sophie had told her she could have some sort of "convening power".

"So she can get people to come and join for a lunch or a meeting and actually listen to some of these issues in a way that other people might not be able to."

Lamb said that she did believe both her and Sophie had the same objectives for the trip - but there was one awkward moment.

"We were talking a lot about the importance of getting justice for women who have been violated in war, because if there's total impunity then it's not going to end.

"I said to her, you know I can't talk to you about what you're talking about justice for sexual abuse and sexual violence when your brother in law Prince Andrew is being accused of being friends with a paedophile and has in fact been accused by one of the young women of having forcibly slept with her when she was underage."

She was met with silence and told she was unable to answer the question - which Lamb expected, but felt the question still needed to be asked.

After returning to the UK from South Sudan, Lamb went on to visit the grand estate of Bagshot Park, where Sophie, Countess of Wessex and Prince Edward reside in Surrey.

She observed that the running costs of the residence must be enormous - and also noted a contrast with the location they had previously visited.

"It did feel very odd going from having been in this really poor, dusty place with nothing hardly functioning and then suddenly you're in this huge sprawling estate," she said.
As a journalist covering injustices around the world, Lamb said the power of celebrity often had the ability to affect change.

"That is why I went on this trip with Sophie at the end of the day, it's quite hard to get people to care about the issue of war rape, to get editors to want to run stories about it.

"But if you have gone there with a royal that we don't normally get access to, it's an unusual royal trip, that's a way of drawing attention to the issue."