'Larry’s genius has always been story' 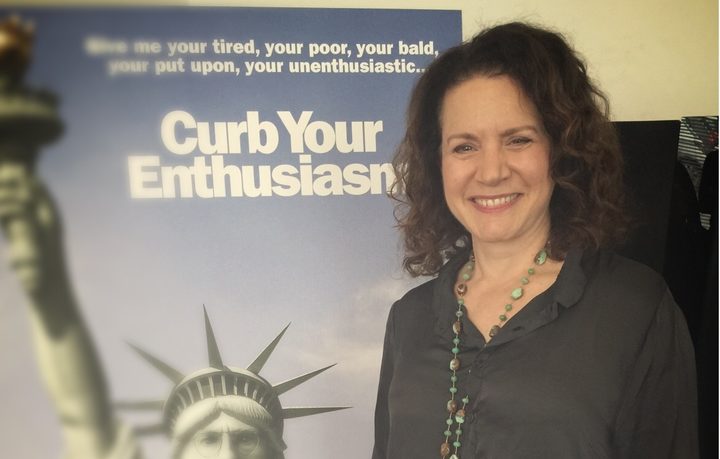 Wallace Chapman caught up with her when she was in New Zealand recently before a new season of the show begins in October.

The character of Susie Greene is so popular that people on the street sometimes ask her to abuse them, Essman says.

“Almost daily ... it’s really gotten annoying. In the beginning, it was kind of cute - 'Look at this, people want me to tell them to go f**k themselves.

“But now it’s 'I’m at the produce counter buying melon. It’s just my job, I’m not in the mood.' And then they don’t leave me alone and I get in the mood!

“I never thought this would be my life, by the way, that I would be beloved for telling people to go f**k themselves.”

The six-year hiatus between Season 8 and 9 of Curb Your Enthusiasm was all down to David, she says.

“It’s Larry’s world and we’re only living in it. Every season Larry would say ‘I’m done, that’s it!’ And we would say, ‘Yeah, yeah.’

“After Season 8 he didn’t say that. I got a call in the supermarket. He called me to tell me it really was all over. I went into a deep depression, I started crying, I was surprised at myself."

David was rejuvenated by the break, she says.

“I think doing Curb is his favourite thing to do in the whole world.”

She says David called out of the blue to offer her the part of Susie Greene.

“He had this idea for a character Jeff’s wife who had a mouth on her.

The programme is tightly plotted but the dialogue is improvised, she says.

“Larry’s genius to me has always been story.

“There’s no script, there’s an outline, it’s not a free-for-all improv, we know what each scene’s about, it’s very structured but there’s no dialogue.  All that filth that comes out of my mouth, that’s all mine!”

David didn’t tell her how to play Susie, but intuitively she knew how to approach it, she says.

“Her complete and total comfort with her anger... women love the character. We’re brought up, you know, to be a good girl - don’t show anger, it’s not pretty.”

Working comedy clubs in New York back in the '80s, Essman says she and her fellow comedians all knew David was a genius – but no-one thought he’d go on to be such a huge success, however.

“When I first met Larry he was a stand-up and all the comedians used to go into the room when he was on. The audience would sometimes just stare at him having no idea what he was doing, he never pandered to an audience.

“One time he walked on stage, looked at the audience and said ‘Nah, I don’t think so’ and walked off!”

Despite the millions he made on Seinfeld, David is the same man he was in the '80s, she says.

“He’s essentially exactly the same, as successful and rich as he is. He dresses better. For years he had a Prius!”

David was always ambitious about the “work”, if not the fame and fortune.

“He had creative ambition. He co-created one of the most successful shows in the history of television.”

Essman is delighted to be back for a ninth series of Curb Your Enthusiasm, she says.

“We’re this little gem in the television world; and I’d like to preserve that.”