The salvage crew is cutting up the remnants of the Rena underwater. As the whole operation gets closer to an end and another summer holiday season looms in Tauranga, how much has the area recovered? Lorna Perry speaks to tourism operators, environmentalists, iwi and the salvors to gauge the situation.
Produced by Philippa Tolley.

Before the earthquakes, Sarah Miles ran a psychotherapy practice in Christchurch. During the recovery phase she was astounded to find that when it comes to issues of real importance to the citizens – welfare, policyholder protection, economic security and education – politicians are conveniently deaf, dumb and blind. She’s written a book intended to expose the Government and the insurance industry's failure, she says, to protect the citizens of Christchurch and draw attention to the need for change to ensure that there is not a repeat of what she describes as the fiasco that happened in her city.
Sarah Miles’ book, The Christchurch Fiasco – Insurance Aftershock and its Implications for New Zealand and Beyond, is published by Dunmore Publishing.

Mediawatch looks at the Hobbit hoopla in the media this week and talks to a British journalist facing a trial for phone hacking about the end of the epic inquiry into Britain’s press. Mediawatch also looks at the risk of ruined reputations in a world where gossip now goes global in a flash; and how a claim of bias boomeranged back on its startled source this week.
Produced and presented by Colin Peacock and Jeremy Rose.

9.40 Liam McIlvanney – And Be a Nation Again

Sunday Morning marks St Andrews Day on November 30 with Professor McIlvanney, who holds the Stuart Chair in Scottish Studies at the University of Otago. Liam’s keen for Scots to vote for independence in a referendum scheduled for 2014. A former speech writer for Scottish National Party leader and Scotland’s First Minister, Alex Salmond, he talks to Chris about the mood of the nation, the emotional tug for independence, and the hard-headed economic decisions that the split from England would require.

Last month Human Rights Watch issued a report calling for so-called killer robots to be stopped in their tracks and this week Jeremy Rose talks to the report’s author, Bonnie Docherty. Wellingtonian Mary Wareham, who has just taken up the position of advocacy director of disarmament at Human Rights Watch in Washington DC, tells Chris Laidlaw about the challenges of convincing governments to give up some of the nastier parts of their arsenals; and Wim Zwijenburg, of the International Coalition to Ban Uranium Weapons, talks about efforts to have a moratorium placed on the use of depleted uranium.
Produced by Jeremy Rose.

Today’s track is a topical political satire from The Austin Lounge Lizards – they play in folk, country and bluegrass styles, and are known for their sharply pointed lyrics that poke fun at politics, love, religion and culture in general. This one looks at the American economy and, in particular, US government bailouts. It’s called (How Do I Get To Be) Too Big To Fail. 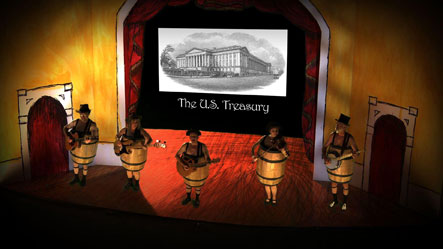 Where does the real power in New Zealand lie? That’s right, with a bunch of bureaucrats, underlings, officials, and lowly-ranked list MPs that you and I have never heard of.  Whether it’s in sport, politics, commerce, education or the arts, the only way to find out what’s really going on in this country is by going ... Down the List. Written by Dave Armstrong and produced by Radio New Zealand’s Drama department.  Today – Novopay, the pricey payroll system for schools, is causing more trouble than it’s worth. 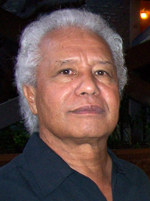 The Prime Minister’s Awards for Literary Achievement were announced this week and Samoa-born Albert Wendt won the $60,000 prize for fiction, recognising the seminal and lasting contribution he has made to New Zealand literature. He has published a substantial body of fiction and poetry and is internationally recognised as leading developments in New Zealand and Pacific writing. He talks to Chris about his life and long career.

Wayne Brittenden has been Radio New Zealand’s correspondent in several capital cities over the years. Each week he gives fresh insights into a wide variety of topics of national and international concern, followed by Chris Laidlaw’s discussion of the issue with guests. Today, representatives of nearly 200 governments gathered in Dohar, Qatar, last Monday for two weeks of UN-sponsored talks aimed at forging an agreement on climate change. Wayne looks at the obstacles – and contradictions – of the event, and Chris follows up with Dr George Mobus, a University of Washington-based expert on cross-disciplinary approaches to understanding complex adaptive systems.