Insight this morning looks at the turn-around in the fortunes of the dairy industry. The sector was meant to transform the New Zealand economy. But are the farmers that produce dairy's white gold going bust?
Written and presented by Nigel Stirling
Produced by Sue Ingram

8:40 Feature interview: Women in the World

Established in 1976, Unifem, the UN Development Fund for Women, continues to fight to eradicate violence against women, promote their political representation and ensure their human rights around the world. Unifem's executive director Ines Alberdi is in New Zealand and tells Chris Laidlaw about progress that's been made - but much more needs to be done.

This week Mediawatch looks at the sudden surge of media interest in Afghanistan now that our SAS soldiers are being sent back there. But our troops have been there since 2001 - so why have we heard so little about what they been up to, and what they're up against? Mediawatch also asks the producer of an award-winning TV investigation from 2006 why it's just been declared unbalanced and unfair more than two-and-a-half years after it was broadcast.
Produced and presented by Colin Peacock and Jeremy Rose.

'Bowling Through India' is the story of five men who headed to India to take on anybody they could find at cricket. The called themselves the Black Craps and they played street cricket where-ever they could - including in the shadow of the Taj Mahal. But author Justin Brown (below) and fellow Black Crap John Bougen (right) tell Chris Laidlaw that cricket is just 10 per cent of the story - it's really about five Kiwi men from different backgrounds and how they handle the great culture shock that is India. 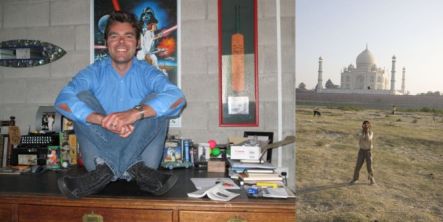 'Bowling Through India' is published by Random House.

Dougal Stevenson had been sniffing at the snuff box of the great Robert Burns.

10:06 The Sunday Group: Dealing with our Drinking

The Law Commission's recent review of the law governing the sale and supply of liquor was released a couple of weeks ago. It looks at the links between alcohol and crime and how drinking affects health. It also explores the liquor industry and New Zealanders' drinking patterns, and makes recommendations for change.
In today's Sunday Group, Law Commission president Sir Geoffrey Palmer discusses some of the main points to come out of the review then Chris Laidlaw hosts a discussion between the chief executive of the Hospitality Association Bruce Robertson and Professor Doug Sellman from the National Addiction Centre (part of the University of Otago, Christchurch) and Alcohol Action NZ.

Each week Trevor Reekie takes you on a trip that seeks out musical gems from niche markets around the globe, the latest re-releases and interesting sounds from the shallow end of the bit stream. Today Trevor digs deep to unveil old sounds from the 60's Wellington underground, an exhilarating slice of flamenco and folk music from the wilds of Western China.
Produced by Trevor Reekie