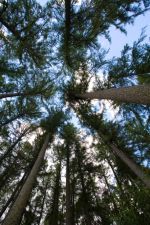 The forestry industry is banking on the dawning era of carbon markets to power it out of the doldrums.

Despite all the bold predictions of a bright future, the forests are shrinking and sawmills are closing around the country; 19 in the last year, two of those in the last month.

But, as Ian Telfer has been finding out, the sector might finally have picked a winner.

With the election looming, Mediawatch this week looks at what the internet has added to the coverage of the current campaign - and the mixed messages we're getting about what the opinion polls are saying. And while the politicians are now letting journalists into their homes to show off their human side, what do we really learn form these contrived encounters?
Produced and presented by Colin Peacock and Jeremy Rose.

One of the country's best-known painters, Grahame Sydney, has published his first book of his photographic work. He talks to Chris Laidlaw about 'White Silence', his collection of photographs taken during a visit to Antarctica.

10:06 The Sunday Group:
The world financial crisis - surviving the turmoil

As the global economy continues to convulse, the Sunday Group discusses what businesses and individuals in New Zealand can do to weather the storm - and make the most of any opportunities that are blown their way. Chris Laidlaw chairs a panel that includes: Craig Richardson, chief financial officer of Coca Cola Amatil; Peter Kerridge, Director of executive search firm Kerridge & Partners Ltd; and Charles Finny, chief executive, Wellington Regional Chamber of Commerce.
Produced by Christine Cessford

Each week Trevor Reekie takes you on a trip that seeks out musical gems from niche markets around the globe, the latest re-releases and interesting sounds from the shallow end of the bit stream. This week Trevor digs up music that includes the French / Algerian stylings from new artist Soha, and revisits a 60's hit that paid for the band's misdemeanour, but still came at a cost.
Produced by Trevor Reekie

10:55 Feedback.
What the listeners have to say.

This week on Ideas, we go back 40 years to the momentous 1968 American presidential campaign and ask; was this the start of divisive modern political tactics?
Produced by American Radioworks. Audio is available on the American Radioworks website.