7:10 Diarmaid MacCulloch on the future of Christianity 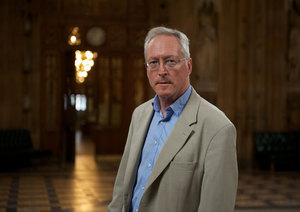 Diarmaid MacCulloch, a history professor at the University of Oxford, is one of the world's most influential - and at times controversial - church historians. He has written numerous books, including, most recently, a history of Christian silence, and is also an expert on the Reformation. In the late 1980s, Professor MacCulloch was ordained as a deacon in the Church of England, but declined ordination to the priesthood because of the church's attitude to his homosexuality.

He  is one of the authors invited to the New Zealand Festival's Writers Week in March.

The Veils' frontman Finn Andrew was so excited to be returning to New Zealand to tour in July 2013 that he said he'd "fashion a raft out of mince and cheese pies and Grain Waves and float into the middle of the Waitemata Harbour with a great big grin on my face". We're not sure if that ever happened, but The Veils did play this joyously melancholic show at The Studio in Auckland.

Produced and engineered by Andre Upston.

8.12 Windows on the World - Sahara conflicts

The BBC's International Development Correspondent Mark Doyle investigates the growing Jihadist threat across the Sahara and Sahel regions of Africa, and asks if a series of separate conflicts are becoming part of a wider front.

Journalist and reviewer Kim Choe examines the latest movies, art exhibitions, theatre, and other cultural events on over summer, and looks back at the best of 2013. This week, Kim reviews The Secret Life of Walter Mitty, August: Osage County, and Walking with Dinosaurs, along with the Christchurch Museum street art exhibition.

The team meets rare chicken breeder Ken Vincent, and Bunny and John Mortimer who have a wealth of knowledge about trees.  They've gifted an arboretum they planted to the people of Waikato.

Ryder Ripps in 2009 established Internet Archaeology in an attempt to archive and preserve some content from GeoCities upon Yahoo!'s closure of the site. He explains what treasures of 1990s and early 2000s internet culture he sifted through the sands of the internet for, and why it's important to preserve aspects of what's a very transitory medium, especially as more of our lives and memories make the shift online.

In our recordings from Womad Taranaki 2013 we feature Vieux Farka Touré. He has been tagged as the 'Hendrix of the Sahara'. He is the son of Grammy Award winning guitarist the late Ali Farka Touré, and although he is only in his early 30s, he has stepped out from his late father's remarkable shadow with a growing catalogue of releases that embrace cultural collaboration, Malian musical roots and his pyrotechnic guitar abilities.