After more than three decades in comedy, Sandi Toksvig is considered a British national treasure. She is the long-serving host of the BBC Radio 4 political comedy panel show, The News Quiz; author of numerous books - including, most recently, Peas & Queues: The Minefield of Modern Manners; has written for television and theatre, and has just been recognised with an OBE in the British New Year's Honours. Born in Denmark, Sandi performed with the Cambridge Footlights while at university, started her career in children's television, and also played on improvisational comedy show, Whose Line is it Anyway.

Journalist Christopher Gilbert makes links between songs spanning decades, genres and ideas, in a journey of music appreciation. This week, Chris tackles the topic of stigma: the way in which what we may think about some bands may be misleading. He also takes a look at a different side of some popular groups.

8:15 Windows on the World - Slavery in Brazil

Brazil's anti-slavery hit-squads are unique. Since 1995, these committed bands of labour inspectors, accompanied by heavily armed police, have rescued 46,000 people deemed to be working as slaves. But Brazil's legal definition of slavery is  contentious. It includes degrading conditions of work, which campaigners say amount to coercion. Linda Pressly meets the campaigners, employers and politicians on both sides of the argument, and hears powerful testimony from the workers trapped in the middle.

Laura Vincent is a Wellington cookbook author, food blogger and restaurant reviewer. She blogs at Hungry & Frozen, and her book of the same name was published by Penguin in 2013.

Listen to all the Soundtracks to sunsets choices on Spotify 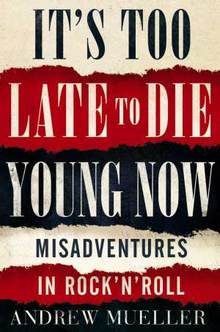 Andrew Mueller talks about what happened to rock after the last hurrah of the British music press. His new book, It's Too Late to Die Young Now, documents his own journey from writing for the Sydney music street press in his teens, to working among his heroes for the legendary UK music weekly Melody Maker by his early twenties. Along with meeting some of those who had made his favourite records, Andrew was also witnessing the end of the British music press' heyday - before the decline of live pub venues and record stores, when music writers' critique still held sway.

Black Seeds guitarist and producer Mike Fabulous has just released his second album under the Lord Echo moniker. He shares with Emma Smith the original afrobeat, dub and psychedelic cuts that inform Curiosities.