James Hope: The past and present of the corner dairy

The Kiwi dairy has been a cornerstone of New Zealand life since the 1930's - not just a source of food, and household essentials, but a newsagent, a post office and a centre of the community.

But are they still? A new exhibition at the Sarjeant Gallery in Whanganui is diving into the world of the corner shop. 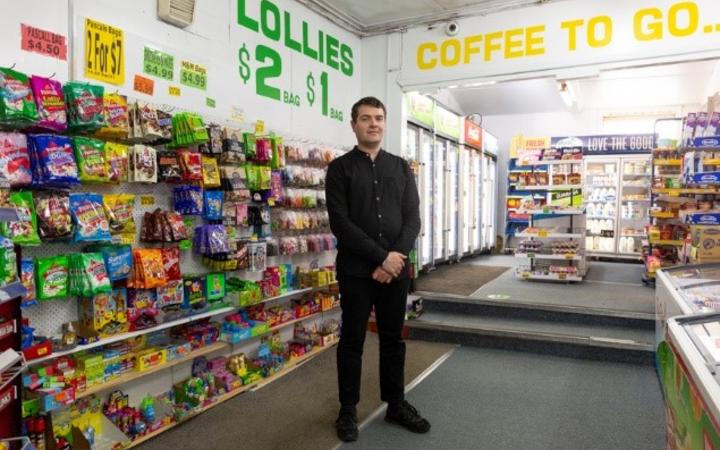 The gallery's assistant curator, James Hope, said the vision for the exhibition came to him when he was driving one night.

"I was actually just driving past a dairy, really. It was evening and the sun was setting and this particular dairy is a wooden house and it's got the dairy on the ground floor and the living area at the top and it had this huge yellow sign that said 'open' and it just seemed like a classic New Zealand scene that you drive past all the time and I was thinking about exhibitions and it just jumped out at me."

Hope told Standing Room Only dairies started popping up throughout New Zealand around 1900. Some were only allowed to sell dairy products, and became known as 'dairy produce'. While the stores have taken on the name of 'dairies' in New Zealand, they're known as 'milk bars' in Australia, 'corner stores' in the United States and 'corner shops' in the UK.

The exhibition displays items from many well-known Kiwi artists, including Glen Hayward and Jay Hutchinson. Most of the art already existed, and fitted Hope's vision for the exhibition. The art is made from a variety of materials, including corrugated iron, wood and ceramic.

"Erica van Zon has these built ice creams, they're ceramic, of a sort - they're dry clay, painted with acrylic. And Wayne Youle has made skully pops, they resemble lollypops, they're made out of resin, but with skulls in different colours, so when you walk into the exhibition it sort of instantly reminds you of the dairy and all those different sort of things that you can enjoy from it."

There's a visual language associated with dairies, and the exhibition has focussed on the Tip Top colours of red, yellow and blue, Hope said.

While for customers they might evoke thoughts of ice creams on hot days, a quick dash to pick up milk and  past-times of 50 cent lolly bags, dairies have become risky businesses, with some owners saying they are living in fear after constantly being targeted by thieves.

"It's sort of a double-edged sword because dairy owners work incredibly hard and incredibly long hours and don't make all that much profit. I think sometimes the common perception is because the dairies sell items for higher than the supermarket that they're sort of ripping people off, but they operate on incredibly slim margins."

They've survived the rise of supermarkets, but can they survive online shopping?

Hope said they're adaptable and nimble, and referred to one he learnt about in the documentary The Changing Face of the New Zealand Dairy. Its owner had gone to great lengths to source the best flowers to display outside their Auckland shop.

"So if dairies are able to diversify what they're able to offer I think there's always a place for them," Hope said.

They're the "heart of the community", where owners often know regulars' names and what they buy.

"I guess they'll always have a place in New Zealand's collective consciousness, there'll always be a nostalgia factor, and for that reason I think they will probably remain, in some form, in the future."