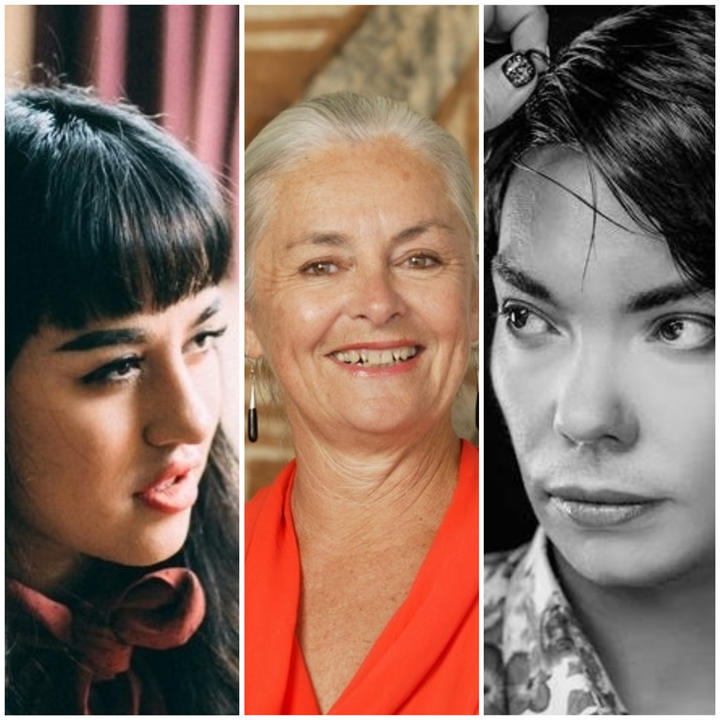 Looking back across the cultural landscape of Aotearoa New Zealand in 2019 some words and catchphrases pop up: encounters, call-out culture, Ihumatao, climate emergency, allyship and, the phrase just named this week by website Public Address as readers of the year, OK boomer. And where once the boxes artists ticked in Creative New Zealand applications had the well-used words diversity and innovation, some new tick options were added: accessible, regional and in place of the locating term Pacific, Oceania or Moana Nui a Kiwa.

It's been an interesting year. And to discuss the things that both inspired and troubled them, Mark Amery is joined by three people who've inspired very many themselves; Auckland Journalist, critic, culture editor at The Spinoff and playwright Sam Brooks; former Artistic Director of both the New Zealand Festival and Auckland Arts Festival, and officer of the NZ Order of Merit, Carla Van Zon, and poet and essayist Tayi Tibble (Te Whanau-a-Apanui/Ngati Porou) author of Poukahangatus, who this year edited literary journal Sport.

Something that was favourite art or literary work: Sport 47

Something/s that were favourites in arts discipline/s outside of literature: Holly Rocck and Miriama Grace Smith's exhibition Lost and Found at Manky Chops - Māori Kombucha Cocktails, A DJ, Half-Caste, a skate ramp, a party from dusk til dawn. Every Māori in Aotearoa was there. It was the perfect example of rethinking what an exhibition space can be and how to make Māori art accessible and exciting for a Māori audience.

Something that promises much for the future: Indigenous mobilisation online/on Instagram

Something that was questionable for you: Pākehā allyship and palatability.

A key issue that kept coming up in the arts: Mana Munchers, like Clout Chasers but with a Māori flavour LOL. What is the line between 'for the kaupapa' and what is exploiting artists/expecting artists to work for free? How do we navigate around our own artists taking from Te Ao Māori or other artists, but showing little to no reciprocity?

Your most moving arts encounter: Ihumātao

Your most disturbing arts encounter: Miriama Grace Smith, Isaac and I, after our very first Brui (Beers and Hui, a monthly meet up for creative natives in the city) tried to tag the Endeavour, but it was traumatising.

Something that was a favourite performing arts work: Tupua Tigafua's Shel We.

Something that was a favourite in another arts media: I saw Lisa Reihana's work In Pursuit of Venus again at Adelaide Festival and loved it as much the second time around. Māoriland Film Festival. Taonga Moana/Voices NZ.

Something that promises much for the future: The growth of Regional Festivals - and in addition the diverse group of new directors. Tanea Heke, new Director of Toi Whakaari: New Zealand Drama School. The growth in and visibility of some great Pacific contemporary arts, like Anapela Polata'ivao and Poulima Salima's Le Opera that was at Nathan Homestead, The Conch's A Boy Called Piano and lots of work by Victor Rodger. The growth of independent Māori theatre companies and Kia Mau Festival

Something that was questionable for you: The Government says it values the arts but I don't see this resulting in change on the ground.. Relationship between CNZ and the arts community. Little or no work being done to ensure that the arts outside the main centres has importance placed on it (is seen to be valued) and is shown in the media (however, I'm delighted to see new Arts in the Region Fund from CNZ).

A key issue that kept coming up in the arts: How do we ensure there are more women, Māori and other diverse peoples in roles of power in the arts? How do we work to ensure there is a greater relationship between regional NZ and the arts - both in presentation and participation? How can we get more arts coverage in the media in general? Currently there is very little. We need to do more to mentor the next generations.

Your most moving arts encounter: Nancy Brunning's tangi. A great loss to our community and to Aotearoa.

Your most disturbing arts encounter: Victor Roger's Club Paradiso and I loved Sam Brooks' Burn Her - and a last addition, a Boy Called Piano.

Something that was favourite performing arts work: Two things - Wild Dogs Under My Skirt, one of the best shows I've seen in ages, with one of the best performances I've seen in years from Anapela Polaivao. Carly Rae Jepsen, for rewarding a decade's worth of obsession fandom with a tight, joyous, and beautiful show.

Something that was a favourite in another arts media: Gris, a little short video game about working through the grieving process. Haven't seen something that gamefies that process so well and makes into something understandable and beautiful.

Something that promises much for the future: Watchmen, not just for being good, but it represents an intelligent deconstruction of popular media that we're going to need as we keep regurgitating our own media.

Something that was questionable for you: People's responses to be funded and defunded - it's disingenuous to present it simply, and I think for far too long we've been treating as a project-by-project kind of a thing, rather than something that needs genuine investment.

A key issue that kept coming up in the arts: Pay people. Just pay people for their time, pay them what they're worth. If your art can only exist at the expense of someone's life and energy, it's not worth it.

Another key trend noticeable in the arts: We reduce things to takes, to tweets, to memes. Over a weekend, a film we've all seen can be dissected for parts, and it does nothing for either art or audience.

Your most moving arts encounter: My Heart Goes Thadak Thadak. You really felt the love that everybody onstage had for what they were doing, and it was bursting with the kind of enthusiasm that you don't often get on a mainstage. When that's married with genuine craft and excellence, you're away sailing.

Your most disturbing arts encounter: The Audience. It represented such a boring, backwards, safe attitude towards programming and I expect more from our leading theatre company.