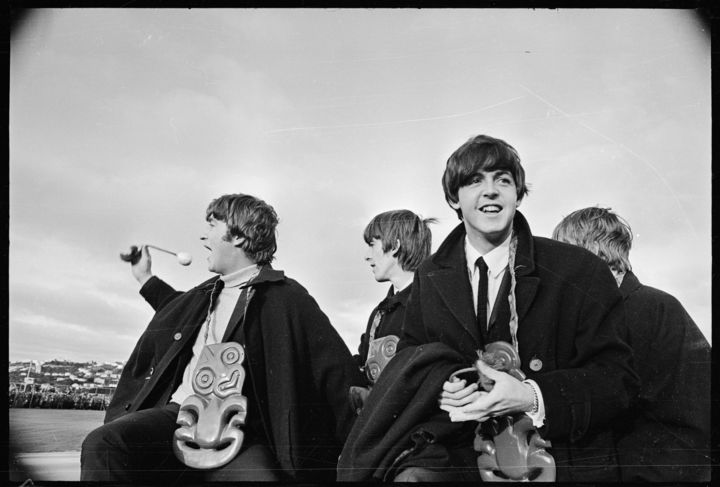 New Audioculture content director Chris Bourke looks back on the Beatlemania years from a Kiwi perspective.

When The Beatles hit Aotearoa in 1964, the country stopped in its tracks - literally. Chris says "I remember the traffic being stopped on Cobham Drive, by the airport, and my father wondering 'what the hell is this all about'."

Everyone had an opinion about The Beatles. Many local musicians were skeptical about the Fab Four - there was no way a band could have not one, but three incredible songwriters in it. There had to be a team of ghostwriters behind them, surely.

Howard Morrison was one who was deeply suspicious of The Beatles. A few months before the tour, he wrote his own lyrics to the tune of 'I Wanna Hold Your Hand': It was re-titled 'I Wanna Cut Your Hair.'

Ray Columbus and The Invaders were taking notes on hairstyles and dance steps. Singer Tommy Adderley, who was originally from Birmingham recorded a song in the Beatles style, and was encouraged by the record company to fake a Liverpudlian accent. 'I Don't Understand' went on to be a hit in Canada.

Dance-halls around the country were full of Beatles covers bands, and The Beatle Inn was opened in Auckland. "The band there were called 'The Merseymen' and had two famous members - Bob Harris, who played with Johnny Devlin, and [music journalist] Dylan Tait, who played the drums."

Music TV show Let's Go had just begun, with bands such as The Librettos showing up for live performances. "The funny thing about The Librettos, is that the producer insisted they comb their hair back, because the front-forward combing wasn't yet acceptable on nationwide TV" says Chris. The band could have been dead-ringers sonically for The Beatles though.

"You had people who emulated them, people who copied them. Everybody had their game lifted a little, having been inspired by The Beatles."