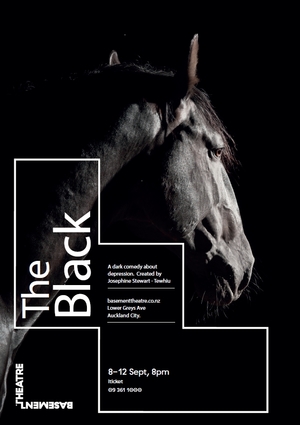 I want someone who's depressed to watch it - to feel like they're not alone.

In the new play by Josephine Stewart-Tewhiu, a young woman named Cleo is stalked by her depression in the form of large, black - and talking - horse. Josephine says the idea of using a horse came out of a long struggle to find a way to write about depression.

'I didn't know how to write about something that's nothing, and formless. So I needed to give form to that thing. And when I did, and when I gave myself permission to give it a voice and make it almost surreal, it worked.'

I feel a movement behind me. I turn and in the distance a single black horse is standing at the lights. It's pawing the ground with its hoof, stamping impatiently. There's blood coming out of its nose, steam from its breath haloes its head - Cleo. (Josephine Stewart-Tewhiu.)

As a physical manifestation of depression and with the ability to speak, The Black is given licence to say things - the kind of things no friend would dare to tell you, or that you would ever dare to tell yourself. 'All those terrible things that you think and you're not allowed to say, The Black says' laughs Josephine. She dismisses any idea of  a tragicomic backstory involving the lead character and a horse and instead points to the use of horses as symbols in art and mythology. Horses are beautiful and romantic creatures, Josephine says and connects them to the way in which creativity and depression are romanticised by the public.

In a recent and somewhat contested study, scientists in Iceland reported that on average, people in creative professions were 25% more likely to carry the gene variants for bipolar disorder and schizophrenia than people in other kinds of employment. This study is hardly undeniable proof of the old idea of the tortured genius, but most in the theatre game would say they know plenty of unhappy artists. For Josephine, the issue of creativity and a possible link with depression is less theoretical. She has experienced depression since her teens and feels that the subject is not being discussed enough, especially in her industry.

'I noticed a real lack of it in our theatre. Rob Mokaraka wrote this beautiful piece called Shot Bro: Confessions of a Depressed Bullet about his own battles with mental illness, but they seem to just spike up and disappear. I wanted to tell it.' The play, which features acting, animation and live drawing is directed by Thomas Sainsbury. He is uncertain about the link between depression and creativity but points to a possible causal factor.

'I guess (creative people) talk more about life and more about existence. So therefore maybe you would ask these questions that might tip people into depressive episodes.'

Thomas talks up the humorous aspects of the script, arguing that comedy is an extremely appropriate way to talk about a subject as serious as mental illness.

Depression is an absurd affliction. It lends itself to comedy quite well because it is so absurd. Actor Kate McGill, who plays a character in the play called Sondra, agrees and argues that laughter is the best way to deal with the darkness.

'Within the play there is lots of nuance and lots of funny...it is educational but it's also very human and real. I think people will really respond to the beautiful depth as well as the eccentricity in it.'

And Josephine says the heartache and the humour of The Black is creature we all know.

Giving people permission to laugh at themselves is really important. It takes the power out of it a little bit when you can laugh.