“A lot of the most powerful things come from personal experience. I use those experiences in a universal context but they come from a subjective experience of the body.”

This year’s Tempo Dance Festival in Auckland sees the return of one of our more interesting artists. Expat Alexa Wilson is a dancer and choreographer, a performance artist and a theorist who, in her own words, “likes to get naked a lot on stage and wield weapons”.

Alexa is bringing two shows to Tempo. One, called Q&Q with A&A, is a collaboration with experimental dance artist Anna Bate; the other, The Status of Being, is a full-length work for Footnote Dance Company. Both promise to feature her uncompromising and exhilarating approach to performance. 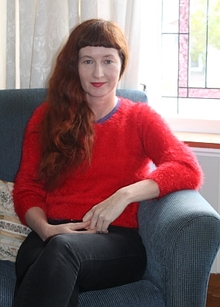 Alexa Wilson was born in Auckland and grew up in multi-cultural Ponsonby. She began dancing at a young age but in her teens heard the call of art and academia. After leaving school, she studied sociology, media, and gender studies at the University of Auckland. It was in a class on performance art theory that she understood that what she wanted to do as artist and as a dancer could be embodied (literally) in performance art.

“[I got] more interested in the embodiment of ideas - political, identity politics, feminism, and post-colonialism – and it felt like performance was a good platform for all of them.”

After graduating, she auditioned for the contemporary dance programme at Auckland’s Unitec and was accepted. Hers is a multi-disciplinary approach; film, writing, theory and theatre all inform her work. It sometimes makes it tricky for others to define her but for Alexa, the question of labels really only occur when she is required to self-describe.

“They tend to rear up when you have to apply for funding! You have to be describable when you explain what you’re doing. But I’ve noticed across the world that multidisciplinary practices are becoming quite prevalent, especially for fine arts. Whereas dance in New Zealand is generally more formalistic.”

Alexa cites local dance heroes Sean Curham, Val Smith, Brent Harris as examples of other artists working in multi-disciplinary, conceptual forms. While she is quite comfortable with her art being described as boundary-pushing or challenging, she dislikes the push to surround her performances with explanations. Audiences don’t need that, she says; they are able to simply watch, appreciate and enjoy.

“[My work] is quite accessible in the sense that it works with very direct forms of communication like theatre and film. So it doesn’t actually need to be explained because they do actually get it.”

It’s inevitable that not everyone who sees (or reviews) experimental work will understand or enjoy it and Alexa has had some epic disagreements with reviewers over the years. Before flying out of New Zealand in 2009 for work and study in Berlin, Alexa sparked a major debate between reviewers, audience members and the dance community over her large-scale work Toxic White Elephant Shock, an experience she refers to as “leaving with a bang”. She has since made work in Europe, China and the United States and comes home when she can. Her show for Footnote Dance Company is, she believes, an example of both the Company taking some risks and the willingness of New Zealand to engage with challenging work.

“I think Douglas Wright has made some fairly challenging work over the years which people seem to have coped with quite well. So I’m hoping that will be the case (for me) as well.”