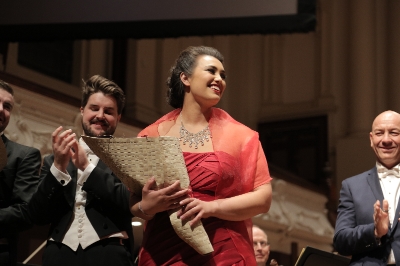 The winner of the 2014 Lexus Song Quest is Auckland soprano, Isabella Moore talks to Lynn Freeman.

Isabella Moore is a New Zealand-born Samoan soprano, who discovered her love of singing at an early age. She holds a Bachelor of Music and Postgraduate Diploma in Voice Performance from the New Zealand School of Music. Isabella is now studying Advanced Vocal Performance at the Wales International Academy of Voice under the tutelage of Dennis O’Neill and Nuccia Focile. Isabella was a finalist in the Royal Over-Seas League Vocal competition this year in London and received an international competitors award. In 2013, she won numerous regional singing competitions and received the Dame Malvina Major Wellington Regional Arts Excellence Award. Isabella was a semi-finalist in the 2012 Lexus Song Quest and won the Radio New Zealand Lexus Song Quest Listeners Choice Award.