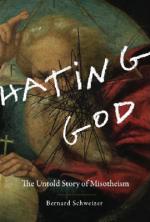 The so-called New Atheism movement has been generating a lot of noise over the last few years. But sneaking up alongside them is a quieter but no less angry group of people, from the opposite end of the god-thinking spectrum. They’re called Misotheists, and they’re fervent believers in God. The only problem is they fervently hate him, too.

Professor Bernard Schweizer of Long Island University recently published a book setting out their concerns and complaints. It’s called Hating God: The Untold Story of Misotheism. Spiritual Outlook producer Justin Gregory spoke to him recently to find out why they are so unknown. But first, he asked him to define what a Misotheist actually is