In The Foorsteps of Alexander Whisker and Hone Heke

Together with his father, RNZ producer Mike Gourley retraces the steps of his great, great, great grandfather  British Infantryman Alexander Whisker, and meets up with the descendants of those he fought in the Bay of Islands during the Northern New Zealand Wars of the 1840’s  . 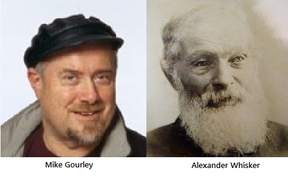 ‘But for his Memorandum book, - no bigger than the size of two cigarette packets and now carefully curated at the Auckland War Memorial and  Museum, Alexander Whisker might well have remained a nameless foot soldier' says  Mike Gourley.

'Alexander Whisker, born 1819 in Markethill, County Armagh. Married Flora Cook of Yorkshire. Accompanied by Flora and his first two children he travelled to New South Wales, and was stationed at Parrematta.      Having escorted convicts from Mother England to Port Jackson, in April 1845 he set sail for Britain’s newest colony.  Like the others in his regiment, he was a soldier doing his job.   But unlike the others he kept a record.  And as a member of the fifty eighth ‘Rutlandshire’ regiment of foot, assigned to military duty in the Bay of Islands.

‘For the fourth and final time, Hone Heke takes to the flagstaff at Kororareka. It’s a call to open defiance of the colonialists. 'How long will the fire of the Maori burn before it is extinguished?' he asks.   Alexander Whisker arrives in Auckland as the lights start going out over the far north.

‘You could call Whisker the forerunner of today’s embedded journalist – Except that he is a soldier, but a soldier keeping a journal. A run-down  of events that will shape the future of post-treaty New Zealand.  Against the backdrop of great events, Alexander Whisker’s is an individual account – a small narrative against so many grander ones. It’s not even the record of a whole life. More the scraps of a life offered up in copperplate writing with all its bad spelling and quaint poetry.

‘But it is a rarity indeed to find a nineteenth century private who is literate. And in the account of his arrival and encounters, there’s a growing fascination with this man – a humble labourer who settled finally in Newmarket; who with his wife Flora brought up a large family, including a daughter Mary Jean; that Mary Jean married a Wilkinson from Dunedin, that one of their sons married in turn and gave birth to my grandmother – my father’s mother.

‘And it is with my father – one degree of separation less than me from Alexander Whisker – who I journey back with to the Bay of Islands. To travel in the footsteps of private Alexander Whisker and Hone Heke.’